I was hurt even though he said I didn’t have to be. He told me I knew. I knew all along. That she was even sleeping in bed with us some nights. That he loved me, nothing had changed about the way he felt about me. I would have his babies, we would get married but that she was around. Still.

I asked if they still had sex, and I felt sick.

Before I had discovered her note, we kissed, and I touched him, and then we had sex with my pajama bottoms still on, just pulled down a little bit.

But we had to be quiet because she was around.

She’s acting weird, he says absent-mindedly. His white torso propped up by pillows, his eyes looking out.

And somehow I did, and I looked up and saw the writing on the wall. Zp, signed with love.

Maybe he said, his finger pushing his lip back into his mouth. His white torso propped up by pillows, his eyes looking out.

Does that bother you? I ask, feeling a pressure in my throat.

He shook his head but unconvincingly so, his finger on his left canine, trying to push it back up into his gum.

I was the one he wanted to marry. To have children with. She was just his first, and I suppose some feelings existed, but then I came along.

We heard a knock on the door and her voice behind it. Not a word, but a syllable, like a cough or a sound, a vowel.

Then her in the doorway. Meek little thing. Like a child trying to be brave. There was a forced fierceness in her eyes, but even that appeared fragile. A petite, dark-skinned thing standing in the doorway, demanding something when she wasn’t the demanding type.

I was overnice. Leapt from the bed, and squeezed her tight. Smiled genuinely. She detested me. She let me touch her, but I knew that it took everything she had to keep her atoms from combusting when I did. She looked at him.

Oh, she loved him. She wanted him. So sad he didn’t choose her. It wasn’t right.

I slept with someone else, she says. And he finally turns his big blue eyes on her. Big blue circles, filled to the brim with water.

Do you mind that I slept with someone else?

He shakes his head, but unconvincingly so, his white torso propped up by pillows. 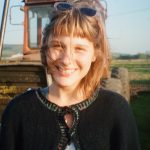 Serena Ferrari was born and raised in upstate New York. She graduated from NYU Tisch in 2016, receiving a bachelor's degree in Film and Television. "ZP, Signed with Love" is her first publication.
Previous Post"The Fog is a Snow Leopard Eating Owslowski" Next Post"Nebraska"

"The Fog is a Snow Leopard Eating Owslowski"

The snow leopard hasn’t been fed. The boy was in a suitcase. The children hid beneath their desks. The campers swam away from the island toward the open lake like jumpers from a burning building seeking salvation in the sidewalk. The fog takes the mountains surrounding the playing field. The count is full. The home team is losing. The batter steps out of the box and takes three practice swings each one finished with the barrel of the bat pointed at Oliver. Oliver is the batboy. His uniform doesn’t fit. Hobbs is Oliver’s father. Hobbs sits in the stands behind home plate waiting for the foul ball to hit Oliver. The fog wraps around the stadium lights. The lights burn dully like flame through wax paper. The umpire raises his mask and looks out at the fog. “Hurry it up,” he calls. The catcher squats. The batter steps into the box. The pitcher’s eyes shift above the glove that covers his   mouth. He looks angry. He looks hungry. How green the outfield grass shining beneath the center field lights! How deft and swift the fog! The fog is an iguana. It crawls up the flagpole and eats the American flag. It curls over the center field fence and