Why do I write? I’ve been hoping you would ask!

I believe the first complete book I wrote was called Mirror of Death. Let me elaborate on “complete book” though. I was somewhere between seven and nine years old. I loved to read and I evidently got it into my head that I would also be a fantastic writer.

I cut up a sheet of standard computer paper from our printer into several small rectangles. I stapled those sheets of paper between two slightly larger rectangular pieces of cardboard. Subsequently, I wrapped the cardboard from the inside front to the inside back piece in silver wrapping paper to serve as my book cover. It was a highly metallic silver, fairly reflective, and thus the name Mirror of Death arose. I scrawled the title across the front in black Sharpie marker. I filled in the pages in my hasty and scribbled handwriting with a story about a mirror at the fair that ate people – at least as best as I can remember the mirror lived at the fair. As a finishing touch, I glued a small strip of ribbon to the front and back inside cardboard edge and used it to tie a bow as a closure for my very first book. I can still remember every detail of the book making process and am proud of it to this day as a very creative thing to do.

I’ve no idea what my parents thought about the title, I’m sure they asked me why I didn’t write about something happy and fluffy like cotton candy. Later in my childhood, still prior to my teenage years, I put together a newsletter for my parents and made them each buy separate copies from my stand on the dining table. I enlisted my younger sister’s help; she was in charge of the Joke of the Day section. I was partial to the Poetry Corner.

I tell you these things about me because to answer the question “Why do I write” I thought it best to lead with “When did my writing start”. You see, I’ve felt compelled to write for far longer than I’ve considered why I do it or even if I should do it. I wrote poem after poem in high school. I started a series about a ghost with my friends on an old typewriter my parents bought me at a garage sale. I researched publishing companies and sent off for all of the free information packets before I was old enough for even a driver’s license.

I write because I am. I am a lover of words. I am an ardent reader. I am an escapist always looking for my next adventure away from reality and often that adventure must be created by yours truly.

I write because I can, because no one can stop me. I write because I can find the most beautiful combination of words just as an artist finds the most beautiful medium to communicate their passion. I write to express myself. I write to put myself in the place of others and give voice to their joys and their woes. I honestly want to write to receive an income but I’ll be honest, I haven’t made it that far yet.

I write because words are powerful tools in the rebuilding of oneself in the midst of heartache or difficulty. I write because words can be the sincerest embrace or the deadliest weapon and I often have need to utilize both. I write to find out my own deepest, darkest secrets that must otherwise remain hidden and polite.

I write in the hopes that I will be read. I write so that others may be inspired. I write for others to find the adventure and the hope that I myself find in the books of so many talented authors who took the time to write and submit and to try again.

I write because I believe writing is a part of me, not necessarily as natural as breathing but similarly satisfying. For years I forgot this part of me; I put it aside and sought financial securities instead. Then my life got a little bumpy. Domestic bliss was less than blissful. A deep depression was slurping dry my joy and hunching my shoulders forward with the weight of all the things I couldn’t say to those I love. When I picked up pen again the words didn’t flow they gushed.

I write without regard to rejection, though not without sting, because I want to improve and I want to be true to myself. I relish the freedom found in these unremarkable black and white letters when placed on a page in an orderly fashion though all around order is otherwise abandoned. 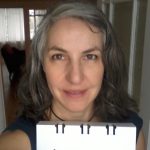 Blame it on incorrect wiring. That for some genetic reason I am unable to pick up on social cues. Most people don’t o
eedeemorin

Katherine Brown lives with her husband and step-daughter in Texas. A passion for books from the time she started reading led Katherine to dream of writing books and opening up a brand-new world for others as well. As a teen, Katherine discovered a new joy in composing poetry. Publishing her first two children’s books in 2017, Katherine hopes to continue writing long into her future and to inspire in others a love of reading for years to come. www.katherinebrownbooks.com
Previous Post"Ablution" Next PostFiction Southeast Editors'Prize

I'd spent the last hour at work heaving fifty-pound sacks of flour from the truck onto pallets, which ought to have bulged my biceps enough to impress Alison and distract her from the situation with Dirk--her vagabond boyfriend and my uncle. At least I'd clocked up enough overtime to help her with the rent. I needed a shower; I was sweaty and covered with flour dust. Good thing it was dark when I walked the four blocks to Alison's apartment. She broke out laughing the instant she laid eyes on me, called me Sir Flour Sack, and ordered me to put my dirty clothes in the laundry basket that she brought into the bathroom. Then she retrieved a highball from somewhere and sat down on the toilet seat. I turned on the shower, adjusted the water temperature until it was steaming hot, and pulled off my boxers. "I suppose you'd like it if I joined you, huh, Jimmy?" "Come on in and find out." She stood up, finished her drink, and tossed the ice cubes at me. "Hey!" "You need a little cooling off down there, buster." She turned to leave, stopped. "That reminds me: your dad called again, insisted you go see him. I