Why I Write: Angie Pelekidis

This kid, at 8 years old, is already a reader. Because she learned that books are magic. You could open them up and disappear into them whenever you didn’t want to be anymore. Which was often.

This kid loved books so much she talked her mother into buying several of them every time the Scholastic newsletter came out. Until one day her mother said, “No more! I just bought you some!” So this kid stole a check from her mother and tried to fill it out to buy books, though she didn’t know how they worked. A life of crime lay in front of her, all for books. Except her mother caught her, laughed, kept the check for years, and gave her the money. This kid has been supporting the literary community ever since.

This kid didn’t come from a family of readers, but from immigrants whose first language was Greek. Once, this kid’s older, teenage sister got the Lord of the Rings book set for Christmas from a cousin who didn’t know how boy crazy she was. The sister looked at the books as though she’d unwrapped a rotting fish. But the kid eyed them hungrily, and stole them the first chance she had in order to devour them. This kid had a father who thought she was weird. “This kid is weird,” he’d say, looking at her as though she wasn’t his. Once, when she brought a book to the table at dinner, he threw it across the room. This kid was often late to the table. “One more chapter,” was usually the reason why.

When bankruptcy made this kid’s family flee Florida back to Brooklyn, her books in boxes moved with them. Often, this kid, now a teen, would cut out of classes at Fort Hamilton Parkway because she probably had social anxiety disorder but didn’t know it then. When she wasn’t hanging out with her friends playing hookie, she could be found in a library, reading Byron, Blake, A.E. Housman, poets who knew how to put misery into words.

When this teen moved upstate to go to college, so did her books, which had multiplied. She read hard then, too, both science fiction and fantasy, but also any British classic because her poet friends had made her an Anglophile. In a Shakespeare class as a junior, only she could answer the random questions her professor threw out to stump his students. “I grow old, I grow old/I’ll wear the trouser’s rolled.” The Love Song of J. Alfred Prufrock, this teen answered. To another clue, she correctly responded English Bards and Scots Reviewers. How does she know this stuff? one student demanded. The professor stared at this teen: “Because she is well read.”

When this twenty-something-year old went to Auburn University, she had no bookcases in her apartment, but the books remained displayed anyway, the boxes on their sides. This person took her first creative writing class at Auburn, though she was not an English major anymore. “You have a talent. Here’s how you submit to journals,” her professor said at the end of the semester. Be a writer? Not an option for this person who came from a practical lineage that emphasized making money over art.

This person’s books returned with her to Brooklyn and eventually Ikea made it possible to put them front and center in the living room. This person fell into public relations because she could pay her bills with it. But she read all the time, went through a Russian phase, a history era, even wrote some on the side. This person had her first short story published during this time. She cried in joy.

In her early thirties, this person’s father died in front of her, and her inept attempts at CPR while she and her mother waited for the ambulance to arrive couldn’t help. In the year that followed, this person realized she could die that suddenly too, and her headstone would read, “PR Professional.” This person took the small amount of money she inherited and quit her PR job to write full time. A year later, this person entered graduate school, eventually receiving her MA and Ph.D in English with a Creative Writing emphasis. This person felt complete for the first time in her life. She was doing what she was supposed to be doing.

This person knows she’s not untalented, and yet doubt crouches waiting around every corner. This doubt is fed by several hands — the academic job market, the difficulty in landing an agent or having a book published — and it looms large. The writers who make it are the ones who persist, she’s heard, and so she will persist. She will disappear into books like she always has, and now, she will also disappear into writing, too. And whenever doubt tries to track her down, she is nowhere to be found. 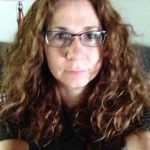 Angie Pelekidis holds a Ph.D in Creative Writing from Binghamton University, where her dissertation won the Distinguished Dissertation Award. In 2010, Ann Beattie selected a story of hers as the first-prize winner of the New Ohio Review’s fiction contest. Her work has appeared in The Michigan Quarterly Review, McSweeney’s, The Masters Review, North Dakota Quarterly, and other journals, and is forthcoming in Confrontation and Literary Orphans. She’s currently a lecturer of writing at BU.
Previous Post"Others" Next Post"The Light on the Other Hill"

Images before the crash—the gravelly craters of the dirt road under headlights, like the moon’s ghastly laughter, or a bedroom ceiling’s milieu of sundials overhead; the paintbrush curve of the road ahead, a crumbly white on black canvass; the black and white external world contradicted by the green glow of the car stereo, still intact and stuck, now, on AM fuzz; breeze, on the car door’s sickly opening, the subliminal accompanist to the heart; clouds, passed out open-mouthed and limbs-asprawl across a surprisingly open sky, with enough room to avoid striking each other after violently rolling over and snoring; and the moon, that silly bastard, that dirty hobo, that crumpled wad of paper, that imploded curve of dirt road inscrutable and uncrossable—the images flashed in his face and were gone forever. He would never see them again. The crash, nearly a minute of spinning and tumbling, was immediately collapsed into a one-second memory of self-abnegating terror. He lay sideways over the gear-shifter and emergency break, his head and right shoulder hovering over the passenger seat. The car’s roof and frame over the passenger window had crumpled like foil. Shattered glass lay on the seat and floorboards. Pain was present, but it