Paper cuts so thin and numerous they’ve changed my fingerprints. Jell-O thick enough that if you were to shoot arrows at my chest you wouldn’t get a satisfying hit. Orgasms that have elected not to happen. Fingers that have found their way inside me anyway. Hairs that I’ve pulled out in rage and in lust. Other people’s hair, I mean. Eyebrows and sideburns. Estrogen that’s slowly leeching into me via a ring in my vagina. More eggs than I care for. More blood. More air. Assorted tubes. Various wires and sleeping pills and hospital gowns that make me wonder if I’m still human or if I have to pay the doctor’s bill before I’m granted that privilege. Very little privilege. Whatever is the opposite of money—sludge, probably. Spoons made from clay instead of silver. Broken locks instead of keys. A useless piece of filigree on the jewelry box that didn’t survive my move cross country. Everything I left behind, but in silhouette this time, like puppets. Like you. Your kitchen knives and your tweezers. Your name carved into my tongue so often that I say it when I breathe. Pleas. But not one ounce of forgiveness. 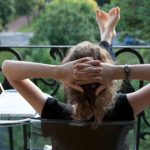 Ruth Joffre is the author of the story collection Night Beast. Her work has appeared or is forthcoming in Kenyon Review, The Masters Review, Lightspeed, Hayden's Ferry Review, Mid-American Review, Prairie Schooner, and elsewhere. She is currently at work on a novel.
Previous PostThe Story Behind the Story: "The Only Song is the Song of the Self" Next Post"The Wade Andrews Story"

The Story Behind the Story: "The Only Song is the Song of the Self"

This story is a fictionalized version of an experience I had in New York on 29 June 2008. After watching Spain beat Germany in the Euro 2008 Final at the Playwright on 49thStreet, my girlfriend and I had gone down to the Village to join the Gay Pride celebrations, but we were late getting down there—there had been heavy rain that year. Like the narrator of “Araby,” all we found was the evidence of a big party scattered over the streets and in the rain-drenched gutters. But unlike the character in “Araby,” I had party radar that guided us towards the Hudson, where we found an enormous crowd of people—largely from the Bronx and Brooklyn and overwhelmingly African American—enjoying the evening and waiting for the Pride Celebration fireworks over the Hudson. We mingled with and enjoyed this amazing crowd of people for a few hours and watched the fireworks with them. But around midnight, a large Police force moved in quickly to clear the crowds, and some people—a lot of us—wanted to continue celebrating and didn’t want to go home. Things got a little chaotic in various spots, but we wound up at the police barrier I describe in the