The Story Behind the Story: “Ravening Beasts”

I went to college in the South so I read a lot of Faulkner, both on my own, and also in class since I was an English major. I think I read As I Lay Dying in three different courses. I’ve lost count of the times I’ve read “A Rose for Emily,” but for a long time I wanted to write a first person plural story. This story seemed to be calling out for this point of view. Like Faulkner’s, mine is about a small Southern town. That’s probably where the comparison ends.

There’s something about modern media that makes us always already a part of a crowd. We’re aware of all the people who are with us watching the same kitties tormenting dogs, the same cute biracial girls dumping breakfast cereal on their daddies’ chests, the same black men getting suffocated by white police officers. We see all the comments of these other users, see the clicks racked up in the lower-right-hand corner, see both the thumbs-up and -down. We know we’re one of many in a crowd. Most of us probably don’t join the conversation—this is just entertainment, after all—but some do. Some of us say—write—things that we might later wish we hadn’t. Some of us will never give what we said a second thought because we’re already writing something else. And then something else. And something else.

The future tense—the way the story opens and closes—also seemed natural. Present tense fiction is a byproduct of the cinematic age. Besides for writers, most readers probably don’t even notice whether a story is told in present or past anymore. But as we venture into the 21st century, now is often not quick enough. We check our feed when we’re out to eat with family, scroll the news while watching real housewives, shop for shoes while we read Dostoyevsky. (Just kidding, we don’t read Dostoyevsky.) Our phones aren’t new enough, our networks aren’t big enough. We’re yearning for light speed with our furious clicking and swiping and scrolling. I know we’re supposed to be excited about our abilities to consume so much information or maybe just thrilled at the possibilities. I am, I promise, I’m not a Luddite, my phone is smart, I publish my fiction on the web.

In the last line of the story, I originally wrote, “…we’ll stream out into the sunshine, frothing at the mouth like ravening beasts.” That sounded biblical to me, apocalyptic, an image coming from either the beginning of human time or the end. And a better title than a simile. 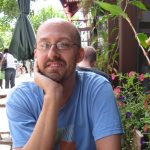 When Christine receives her award for “Good Citizenship,” the presenter will try to kiss and fondle her. She i
tailbird

John Duncan Talbird’s fiction and essays have recently appeared or are forthcoming in Ploughshares, Juked, The Literary Review, Amoskeag, REAL and elsewhere. His short story collection, A Modicum of Mankind, will be out from Brooklyn press Norte Maar by the end of the year. An English professor at Queensborough Community College, he has held writing residencies at the Virginia Center for the Creative Arts and the Lower Manhattan Cultural Council. He is on the editorial board of Green Hills Literary Lantern and lives with his wife in Brooklyn.
Previous Post"High Dive" Next PostThe Story Behind the Story: "Infamy"

Jenny climbed the first rung of the ladder, bare skin against abrasive grip. An older girl, two boys from her class, and some fat kid were in front of her in line. The fat kid’s swimsuit dripped on her nose, his butt inches from her face, as he suddenly stalled while she tried ascending higher. The older girl stomped down and sprang off the board, jackknifed in the air, plummeting toward the pool, her hands cutting effortlessly through the water. Hardly a splash. Next, the two squirrelly boys from her class scampered out on the diving board together. They half embraced, half pushed off each other. For an instant, as they raced to the edge of the platform, it seemed they were locked together, running over the air like cartoon characters, their legs cycling for a foothold as they hovered. Then, instantly, the pool shattered, a girl below them shrieked, and the lifeguard blew her whistle. The water’s bright gash healed around them. Tiny bubbles rose, obscuring their murky outline below its depths. The fat kid toddled out, patted his blubbery belly, then heaved up with a crack of the board and cannonballed earthward—spray shot up—and the water swallowed him whole. He disappeared. Jenny’s