The Story Behind the Story: “Together”

Ever since reading Jeffrey Eugenides’ novel Virgin Suicides in 1993, I’ve been fascinated by the first-person plural voice and how it can operate in a story or novel. The plurality brings a unique choral quality to the narrative. A clique of teenagers (Virgin Suicides), a band of brothers (We the Animals by Justin Torres), a small community of Japanese picture brides (Buddha in the Attic by Julie Ostuka). The repeated incantation elicits a whimsy and lyricism that propels the narrative along; but in many of these stories, intense violence arises within the hypnotic prose.

I teach a workshop of advanced fiction here in Austin, Texas, and I’m always encouraging my students to experiment with new forms and voices, particularly ones that offer up inspiration and invention. With “Together,” I decided to take my own advice. At the time, I had taken a short break from writing a novel due to a string of family crises. One of the more troubling events was my mother suffering a nervous breakdown in September 2012. One psychiatric-ward admittance led to another and then another until my mom had become acutely depressed and anxious, making it difficult for her to participate in her former life. Over the years, my mom’s condition has presented a multitude of unexpected challenges for my older siblings and myself, one arrangement shifting into another, with hopes of providing our mom with what she needs.

Not surprisingly, my mother’s mental illness brought sharper focus to some childhood memories, and I started to write a series of short fiction partially inspired by these moments. The fictional hinge of “Together” opened up when I decided to place the piece into the first-person plural voice. Unfortunately, when my siblings and I were kids, we weren’t a united front; instead, we were isolated from one another, each of us like a firefly captured under an overturned Mason jar, and in our own distinct ways, we did our best to get by. That said, as adults, this began to change in coping with my mom’s four-year-plus journey of facilities, doctors, and treatments. As time passed, we did our best to work together as we attempted to make the best decisions for her and her care—and she has experienced a few stretches of stability. On one memorable morning in August 2013, we moved her to an assisted living facility in St. Clair Shores, Michigan. My older brother, who spends most of his time living in foreign cities as a film producer, demonstrated his expert skill in assembling a small apartment of IKEA furniture in record time (for each project he moves to a new city, where he often sets up a new apartment). We were all impressed his agility with the screwdriver and intuitive understanding of the cryptic assemblage instructions.

“Together” is a fictionalization of what might have been for my siblings and myself during our younger days, but eventually what we learned to become later in life. Though it’s a sad short story, I feel like the moment at the ending resonates with love, compassion, and hope. That families can persevere through most circumstances if they remain together in one form or another. 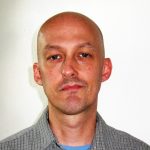 S. Kirk Walsh lives and works in Austin, Texas. Her writing has appeared in Guernica, the Virginia Quarterly Review, the New York Times Book Review, the San Francisco Chronicle, among other print and online publications. She has received residencies from Yaddo, Virginia Center for the Creative Arts, and Ragdale, and is a graduate of New York University\'s creative writing program. Currently, Walsh is at work on a novel set in Belfast, Northern Ireland.
Previous PostWhat We Were When We Drew What We Drew Next PostFlash Audio Series: "Okay But Will You Anyway"

I think Gabe must have been about fourteen when he lost his face, right before Christmas, body pinned in the back seat of the accordioned sedan, the flames reaching him just before the jaws of life did. Gabe lived in the hospital for half a year, then all of sudden he showed up at school at the end of August with his head looking like it had been dipped in melted wax. He could still see through one eye, through a pseudo-eye like a hotel peephole poked into the scar tissue when it was still wet. He breathed through two holes in the middle, heard through two fleshy seashells for ears, ate through a dry crack in the plaster of his thickened skin. They say that this skin came from somewhere else on him---a second wave of unsettling imagery. The teachers did their best to protect him but it was inevitable; in the class-change scrums, in the locker-room corners, kids pinned him up against walls and graffitied his blank face with Sharpies. Smiley faces, jack-o-lanterns every October and hearts at Valentine’s, swear words, doodles of vaginas and penises, middle finger salutes. Gabe didn’t cry---or if he did, we couldn’t tell, his