The Story Behind the Story: “Rainpainting”

Andrew SiegristThe Story Behind the Story0

Half a mile from my family’s home in the Appalachians of Southeast Tennessee, there is a woman who ties window frames from the high limbs of a hemlock. She hangs doors from thick tree trunks, and, if you swing them open, all you’ll see is the forest beyond them growing thicker. She lives out of sight from her neighbors and far enough from the road that passersbys can’t see that her birdbaths are filled with stained glass.

The woman calls it The Art Garden, a friend told me as we walked a path through the woods that was lined with rocks painted different shades of blue. A wind chime made of pennies tinked metallic sounds when a breeze came through. My friend happened upon The Art Garden while he was renting a room above the woman’s garage. And to this day, he and I are the only people, besides the woman herself, that I can say for sure have seen the place.

For a long time after he took me there, I wanted to write a story about an artist who makes things that might possibly never be seen by anyone other than herself. But as years went by, I began thinking less about the artist and more about the people who get the chance to witness art that might not have been intended for them to see. And so I began imagining two children deep in the woods seeing something they didn’t know existed before, something strange and beautiful.

Because to me that is what stories that is what stories are. When you come across them, they surprise you in ways you weren’t expecting. They cause a sense of wonder within you. They make you see that there is still magic hidden in the folds of the world, and in the dark corners where we too often forget to look. And now when I think back to the few minutes my friend and I walked amongst the art made by a women whose face I never even saw, I don’t wonder about why she hid those things deep in the forest. Instead, I feel thankful that I was able to see a world stranger and more beautiful than I had known before. 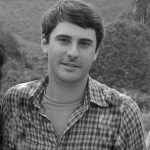 The summer we lived with Dad, there was a neighbor whose voice we never heard. We’d see him walking through the w
asiegrist

Andrew Siegrist is currently a graduate student at the University of New Orleans. His work has appeared, or is forthcoming, in Pembroke Magazine, Greensboro Review, and Revolution John Magazine. He is from Tennessee.
Previous Post"In Your Honor" Next Post"Gail"

We planted a tree in your honor on the curve of the narrow road.  A seagull cried on his journey to the sea and in the fields the cows raised their heads. Their jaws worked the grass and their brown eyes were sullen. They might have gazed at you the same way when you took the last walk in the rain. I tried to imagine them startled from the sound of the car brakes screeching, but I knew that wasn’t the way it went. They would have looked on bored, while I washed dishes in the sink. The priest held the seeds in his joined hands, as if he held the body of Christ in the April sun. The priest wasn’t my idea. I don’t know if you would have agreed or not. The questions I never asked are the ones that get to me now. Sunday morning, when you’d get ready to take your mother to mass, I never said, “Do you enjoy it?” I was more inclined to remind you to get milk on the way home. The priest was your mother’s idea. She’d gotten smaller every week. Each time I saw her I was afraid that she would