Below the clouds was the Mountain, and below the Mountain was the Pit, a massive shadowy place dug deep into the earth. The boy had spent his life in the Village at the very bottom of the Pit, staring up in wonder at the peak that towered overhead—crowned in snow, reflecting a golden light, a majesty.

The boy knew that few of the villagers had ever left the settlement and seen the other parts of the Pit, even fewer had been to the surface above. Only a handful of villagers in known history had ever been to the foot of the Mountain, and no one had dared climb its imposing stone face.

A blasphemy, his mother whispered in the darkness of the Pit.

At the very top live the gods themselves, his teacher said, they feast upon the clouds.

And what lay beyond the Mountain? Nothingness, the Village elders said. Absolute and total nothingness.

Visible from every angle of the Pit, the bright vision of the Mountain seemed to hover just over the boy’s shoulder every day of his dim life, the source of all light, all life, calling out to him. He wondered what a cloud tasted like, if it was salty, like tears.

One day, for no reason at all, he left the Village and began to walk out into the empty shadows of the Pit. His friends called to him, first laughing, then concerned, and then saying he was in grave danger. He came to the side of the Pit and pulled himself over the rim, blinking hard.

He’d never imagined there could be so much light, the balance of the world had shifted—now the shadows were rare and the light dazzling, seeming to come from every direction at once, so much that he thought it might blind him for life. He was amazed to find his eyes slowly adjusted to the new brilliance and he could make out trees and grass and birds that soared through the air, and so much sky above that he felt he might fall up into it. He saw now that the light came not from the Mountain itself but from an unblinking unwatchable orb in the sky. People below called out to him to describe it—he could not.

Slowly, the boy approached the foot of the Mountain and felt his vision spiral up the impossible heights above him. He felt as minuscule as the grubs that crawled in the soil at the bottom of the Pit: there was no way to reach the peak, not even in two lifetimes, in three. The boy had already come further than most of the people in the Village would ever dream, had looked on the place where the Mountain pushed itself up with great might from the earth—he would be remembered. He turned to leave and saw his home in the Pit from above, transformed into something different, smaller, and he wondered what it looked like from even higher, what the Mountain’s own view of the Pit was.

He started to climb. His teacher yelled out to him, called him a fool. He heard his mother wailing, screaming that he would bring doom, tempting the wrath of the Mountain. The boy pulled himself up, stone over stone, his hands beginning to bleed. When the sun came down, there was the most incredible vision in his life: the whole bed of stars laid out as he had never seen, for the first time unshadowed by the massive bulk of the Mountain, glittering like a string of wet pearls that stretched across the infinite. He kept climbing.

The boy foraged for food on the mountainside, the air growing thinner and colder, his hands growing harder, more calloused. The Mountain began to feel like a friend and then, as he got higher, like an enemy. He had never seen snow up close but as he ascended, it was everywhere, painful and frozen to the touch. Days passed, years. The boy realized he was no longer a boy, his beard reached his chest. He wondered how he must look to those down below.

The man turned to look down on the Village in the Pit, saw the lights twinkling in the windows, impossibly distant, tiny, toylike, dimmer than the stars—and still he was only halfway up the Mountain. He squinted and saw that the town had grown, it now filled the Pit from end to end, a few lights even shining from above the rim. At the foot of the Mountain was now a large statue—crowds gathered around it to leave offerings, to bow, to pray in supplication—it was a statue of himself. He kept climbing.

He killed the animals he found and wore their skin as clothing. His hands were now hard and gnarled as the twisted branches of the stunted trees that sprung up among the stones. The wind was biting, tearing through the skins, and it had been long years since he had seen another person, ages since he had spoken a word. His flesh hung loose, his bones felt hollow. He found his beard reached his knees, same color as the snow. Looking back, the man could see the Pit only as a dark smudge thousands of feet below. He wondered if his mother was dead. He kept climbing.

The old man pulled himself to the top—his hair falling out in clumps, his teeth rattling loose in his skull—and was almost immediately blown back by the wind, nearly sent tumbling all the way back down the Mountain. Shivering, he reached up but could touch no clouds, still racing high above. The man could barely breath yet the thin air wailed spiteful in his ears, screaming, serrated. There was nothing between him and the sun and he felt as blind as when he first crawled from the Pit, decades ago. He found no gods, the peak was not a paradise but a barren and unforgiving place, bare stone and ancient ice, a tiny desert scraping the roof of the world, where nothing could live for long.

Below the clouds was the old man and below the old man was the Mountain. Looking down behind him, he could no longer see the Pit at all. He turned and looked out in the other direction, to the Nothingness that had been hidden his entire life by the huge girth of the Mountain. He was shocked to see that behind the Mountain lay more mountains—dozens, and then hundreds, and then thousands beyond that, each bigger, more imposing, more impossible than the last, rippling out in all directions as far as he could see, not nothing but all-things. At the foot of each mountain was another pit and inside each pit was another village. He fell to his knees, the ice crackling beneath him, the wind trying to shove him over, tears freezing to his cheeks, and cried out a wordless vowelless sound from deep in his chest.

On the face of each mountain was a tiny solitary figure struggling—another boy, another man—thousands of them, each alone and climbing. 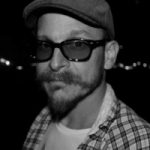 The magician used flash powder to create explosions. He had the rig all set. With the press of a button, a remote
anthony

Ryan Alan Boyle is an editor, writer, and music journalist. He has a masters degree in American history from the University of Florida, and has written and edited several sets of liner notes for albums released by the Numero Group—including Teen Expo: Cleopatra Records, Local Customs: Cavern Sound, Joanna Brouk: Hearing Music, The Royal Jesters: English Oldies, and Eccentric Soul: The Bandit Label, among others. His fiction has been shortlisted for the Mighty River Short Story Contest, the Wilda Hearne Flash Fiction Contest, and the Indiana Review Fiction Prize. He lives in Brooklyn, New York.
Previous Post"Why Is a Raven Like a Writing Desk?" Next Post"Writing and the Unconscious: A Personal Exploration of Process and Content"

The life of an author can be peculiar. Certain experiences ought to be grand events accompanied by trumpets and elephants, or at least a little snowfall of confetti and cake served up by your bestie. Moments like winning an award. Or signing with an agent. Or plunging into a writing career possessed by a passion that surely will mulch any obstacle in the wood chipper of artistic devotion. Sometimes, however, you fall down the rabbit hole and discover that the Duchess’ baby has turned into a pig. The first two weeks of my writing career, for example, were spent curled up under my dining room table. Ten months before the plunge, I had moved from one coast to the other to accept a promotion. Unfortunately, my security clearance provided access to corporate secrets that staggered my ethics. Eventually I dropped a resignation letter on the appropriate desk, moments after which a very kind woman from human resources escorted me to the exit. Two weeks to hit the rest button wasn’t, I think, an inappropriate pause. So, the unicorns that normally canter about and the fairy dust that usually besprinkles the launch of a new career couldn’t attend my tea party. But once I