When doors open on the fourth, we’ve regressed, become primal—pushing, craning our necks sideways, forcing our bodies in, in, as though another train will never come. The end of day thrum has transformed us, made us feral.

After several stops, pressed against a sea of strangers, I locate a seat. My bones have thawed from the icy winter chill, my underarms dewy with the concentration of body heat. The woman next to me stares intently at her phone as dancing candy icons link and explode across the screen. Only I notice him.

His back is flat against the metro train wall, his gaze thrust overhead. His legs push out from under him, an attempt to steady his shaking. With each gentle rock of the train car, he settles deeper into himself, his knuckle-white grip fastening on the handles of his briefcase. His sobs are dry, gentle.

His pain consumes me. I am suspended, absorbed in it.

I study the slight wince of skin around his sunken, tired eyes. His chest, stilled by seized breath, hollows with each exhale; his eyes swollen and pink with tears that will not shed. He is middle-aged, his hair soft and downy and his skin sallow, like a boiled yolk.

“Do you want …” The woman next to me breaks from her trance to offer a half-hearted gesture towards her seat. I feel guilty for not thinking to do the same.

The man coughs, catching his breath in his palm. “No,” he says, his voice surprisingly firm.

She shrugs and returns to her screen.

My mouth hangs slightly open, my tongue pulsing, as if to taste his pain. His pain, bitter as bile, yet intangibly sweet, as raw as it is real. I watch his chest still, his lungs like too-full balloons.

The train reels along the track, beginning to slow, braking with a low whine. I close my eyes and w 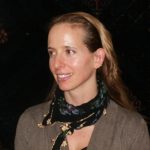 It would be evening, before the rush, when the sun was no longer sweltering but still hot, a ball of fire halfway
forbes

Meghan is a graduate of George Mason University’s Creative Writing MFA in fiction. Her writing has appeared in such places as District Lit, Door is a Jar, and The Magnolia Review. She is a founding editor and the director of media & marketing at Stillhouse Press, an independent, nonprofit book press based in Northern Virginia. In her other life, she works full time as a sommelier, telling very short stories about wine. She lives with her partner and three rascal cats in Northern Virginia.
Previous Post"The Secret Musicians Know That Can Help Writers" Next Post"5 Steps to Better Worldbuilding"

"The Secret Musicians Know That Can Help Writers"

I am grateful that I came to writing after years spent as a practicing musician, where I learned perspectives that make my writing life easier, and came to understand the core secret behind any creative endeavor. First, the perspectives. 1/Practicing is an act of faith When I grew frustrated in my piano lessons with Maria, one of my most important teachers, she would say that sitting down every day at the piano is an act of faith.  Some days it goes well, my hands feel great, the phrases come together with ease, and I can stay at my instrument for long stretches without feeling distracted. Other days, I look down at my hands and wonder who they belong to. On those days, my fingers feel stiff, I’m fighting the piano, my mind drifts off, and the music seems boring. But I stay anyway.  I’ve been in this place before and know that tomorrow, or the next day, or perhaps next week, I will feel connected and fulfilled.  I know that the music will eventually yield to the repeated application of hard work and diligence. And that if I stop, the ground will be steeper when I return. 2/ Daily time is a necessity I often tell my piano