The girl has waited a year for the boy to kiss her. Now it’s close to midnight and they’re outside of a university library. The wind picks up and the palo verde leaves circle their feet. The girl tightens her sweater around her, well aware that winter has crept up upon autumn and is ready to strike. She can feel the concrete bench beneath her and she wonders what to do next. Her confession of desire in the previous month went unnoticed, yet here they are alone in the dark.

Then, the girl feels the boy looking at her. She can hear his feet scrape the rocky red pebbles beneath them. Her face starts to burn and a quiet panic takes hold. She realizes his head is coming toward her face. She remains as still as she can, frozen in place. When his lips finally touch hers, she does not know what to do. She responds with a bit of pressure to his upper lip and hopes it’s enough.

“Suck harder. You’ve got to make sure that you intake all the smoke. Like this,” he says, inhaling and placing his hand on his chest.

She imagines the smoke venturing into his lungs like a diver trying to get to the ocean floor.

“Take smaller hits. It won’t hurt your throat as much, and then we won’t waste so much pot.”

She takes the pipe and readjusts herself on the hood of his secondhand Camry. They are surrounded by the racetracks, the soccer fields, the fair ground, the multipurpose park. At first it seemed like a strange place, a place the police might look. She takes another hit off the pipe and watches as it turns orange. She coughs. No one is around.

“Wow, that was a big one there.” He pats her on the back and motions for her to pass the pipe.

She watches as he sucks in the drug without coughing and thinks he always was the more experienced one.

A girl and a boy sit outside of a coffee shop. They chatter back and forth, unaware of anyone around them. The desert heat disappeared months before, and a dry February chill settles over the afternoon. They’ve sat at this table each week, at three o’clock, all year. This time the boy makes the girl cry; he no longer wants to sit at this table with her. He looks around at the other patrons, embarrassed by what he’s done. He fears they will hear the girl’s seal-like sobs, so he walks away. The wind picks up the girls’ tears and carries them toward the dirt median across the road.

He thumps his chest. “There has been a void.” He looks like a monkey proudly returning to his mate.

The teapot begins to whistle.

At night, they lie on his parent’s bed in what used to be his room. Except now nothing, including the bed, is his. The man has pulled the woman into his arms. He is silent. She can hear only her breath, her convulsions. He says something, but he’s turned, so it sounds as though he is conversing with the ceiling. For a second, the woman wonders if there is someone else in the room. I love you, she hears.

She picks up the phone. It’s Thursday. They make it through the pleasantries and then the silence pervades the call.

She can hear the rain where he’s standing. She knows you can do almost anything backward, but you can never go back.

She wishes his green eyes were in front of her; then she would know if he was lying. She can’t remember setting the receiver down, but she’s no longer holding the phone. The purple, white, green, gray colors of the comforter engulf the girl. Silence surrounds her sadness, but she doesn’t cry.

A woman and a man sit. The woman cries. The man strokes his metal chair. She hands her anger over, and he takes it. She is a skeleton now, every last emotion she gifted to him.

Everything has a lifespan. Even the bookstore next to this coffee shop died last year.

Her eyes close and she starts to imagine a life without him. A life where unease dissipates rather than overwhelms. She can no longer hear the espresso machine humming or the other costumers’ conversations. Silence hugs her, and when she opens her eyes, he’s gone. 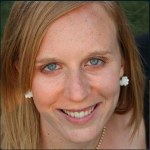 The Story Behind the Story: “Pulse”

I originally wrote this piece in 2006 while taking a class at the University of Arizona’s Poetry Center. The class f
erin-armstrong 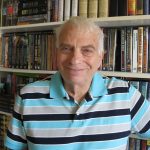 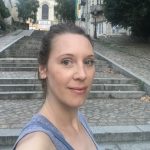 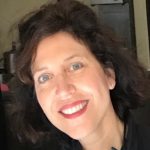 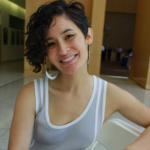 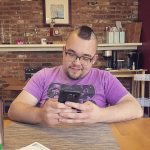 Erin Armstrong received her MFA from The University of Arizona in 2011. Her work has appeared in The Blue Guitar, FoundPolariods, Marco Polo Magazine, and is forthcoming in InkinThirds, Harmony Magazine, and The Museum of Americana: a Literary Review. Additionally, she writes a weekly poetry series for Channillo. She lives in Seattle, Washington.
Previous Post"Plain Pine Desk" Next Post"Date"

He bought a plain pine desk. Actually, it was a plain pine table, but he planned to use it as a desk, so it was a desk. He admired the desk’s plain pineness. Plain coffins are made of pine too, he knew. Pine is a soft wood, so to help preserve the surface, he decided to stain it. A light stain would do, something to dye the grain but leave the heartwood intact. But the stain he chose ended up dying both the grain and heartwood several shades darker than he intended. This upset him gravely. Every time he sat at the coffin now he squinted and tried to envision the finish the way he wanted it. He tried rubbing it with rags. He tried scraping it with crumpled up obituaries. He left the window shades drawn so the sun could come in and lighten it. For two days he thought this was working. On the third day be became unsure. He was dreadfully morose whenever he looked at the thing. Instead of writing, he just thought over and over, Fool, you’ve gone and dyed the perfect pine coffin several shades too dark! Wait, did he just say coffin? Desk,