The truly terrifying thing to me is that I’ve been here before. Regrettably, this has become my wheelhouse, my comfort zone, my modus operandi. To feel the tightness in my throat is nothing new to me at this point. So here I am, staring at a blank screen in front of me. There’s a deadline, and I have nothing.

It’s nothing new to me, but I misspoke when I called it a comfort zone. It’s more of an old familiarity that I cannot shake, a high base line for anxiety. We’ve been told we all have two main instincts. We’ve heard it forever. We are taught that in order to survive, we respond with either flight or fight. That’s what it all comes down to. However, as with everything, there is a grey area. I am a flightless non-pugilist. In times of crisis, I freeze. I panic. I crumble. There is nothing.

Of course, if you’re reading this, you know the end to the story. You’ve already surmised the ultimate result, no doubt. There is an inherent giveaway just in the telling of the story. But, I’ve never believed in spoilers. It’s about the journey. It’s about the story of getting to the end.

I don’t think I would ever consider myself a writer. I’ve never published. I’ve never made a substantial piece of work. I’ve never focused long enough on actually telling a story in writing. So, in part, I think that’s where the hesitation comes from. A reluctance to commit to something I know is out of my own depths. An immediate doubt of potential before anything even hits the page. A fear of judgment. And that is something I am all too familiar with. Scared of how others see me. Worried they will see me as I do.

Looking back, there are examples of an anxiety disorder my whole life. The words mental illness were never used until university, but it was always there, that’s for sure. At age 5, my father would have to get the neighbor to help drag me from the house into the car because I fought so hard to not go to school. The crowds of children overwhelmed me. To the point that my kindergarten teacher would leave me alone in the classroom during recess, lights off. This was done to comfort me. At age six I would throw up on Tuesday evenings because the thought of going next door for a piano lesson would physically make me sick. My mother knew it would subside, and pushed me out the door after she cleaned up the hardwood. At age seven, I sat in my father’s parked car refusing to look at my mother. I just shook my head and cried as I gripped a wrapped birthday present until we pulled away from the driveway of my friend’s house. At school on Monday, I would apologize for not going to the party.

There aren’t any memories of this. No flashbacks. I remember them because these stories get recounted to me as anecdotes of how I grew up as a shy kid. I don’t really have a memory of that childhood. And while I can recite snippets to make it seem traumatic, it didn’t really feel like it was. I do have memories of dancing with my mother in the kitchen, my feet placed on top of hers so she could lead me. Or building lean-tos in the forest while my father would saw down trees for firewood, the day culminating in a meal of bologna and beans over a small fire in the snow.

So, how can I offer a competent piece of writing to a group of writers, when most of my memories are just stories retold to me? As far as I know everything is true as I remember it, but does that truly make it non-fiction? And to give a reliable account in a way to have a story arc, a purpose, a sense of captivation seems beyond my potential. Every word I imagine committing to paper carries a weight of expectation, and that stops me from writing anything at all. I just want to be liked. I want to be considered. I want to be good. So, I am locked in a stalemate with myself. Desperately wanting to offer something of worth yet horrified of failure if I try.

My anxiety makes me believe there is a great deal of narcissism in believing that talking about my life would make for an interesting story. But, I suppose there is always a bit of ego regarding anyone with mental health issues – anxiety and depression are considered selfish, to put one’s emotions above a situation, whether intentional or not. Still I sit, sitting still, almost paralyzed by the thought that I have nothing to offer. An audience frightens me.

So, no, I don’t consider myself a writer, but a love of words draws me in. When it all comes down to it, it’s in writing that I’m able to express what I want to. It’s a voice of clarification. A means to fumble through a maze of thoughts. I have always been captivated by the idea of writing something fantastic, something meaningful. But that is why I stare at blank pages. I do not see worth in myself. I do not see worth in what I could offer. I want it to be perfect. I want to create purpose.

What I resort to is the frantic ramblings of pure desperation. Letting the midnight oil serve as my creative fuel. In the late hours, when darkness pours into a room, it feels like anything can ignite. A room so quiet, the only things to focus on are the clicks of a keyboard, the soft exhales of a sleeping partner, the rhythmic beat of a panicked heart. But, at least I can offer something. Which is where I will stop. There is no big reveal. No climatic end. The words have been written, as we knew they were. The meaning of it all is just in the self-discovery, the satisfaction of moving from a wheelhouse and stepping into something else altogether. 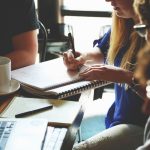 Devin is a new writer just outside St John’s, Newfoundland Canada. He works with a local writing collective called The Relatables and trying his best. Feel free to follow him on Twitter dot com @DevTweeted.
Previous Post"Writing and the Unconscious: A Personal Exploration of Process and Content" Next Post"A Time for Fantasy"

"Writing and the Unconscious: A Personal Exploration of Process and Content"

If dreams are the royal road to the unconscious mind as proposed by Freud, then what are the stories that we write? Perhaps winding, bramble-backed paths, that lead from the part of our mind that is secret from us, to the page. The psychodynamic theory that aids my practice as a clinical psychologist, offers a framework to make sense of what influences my writing. In this model, repressed thoughts, feelings and memories are hidden from conscious awareness. However, they may reveal themselves in coded form including through dreams. I consider that we reveal ourselves similarly through our prose, should we choose to pay attention. In writing, as in dreams, there is both the manifest content (what the story appears to be about) and the latent content (symbolic meaning). In psychodynamic therapy, I focus both on process and content with a client to tap into an understanding of unconscious drivers of behaviour. Likewise, a focus on the process of how we write as well as the content of what we write can be revealing of the self. Here is a fork in the road: do I continue to write in general terms, as though there is such thing as a global ‘we’ of