So on the way to dinner (for shits and giggles, she said) my date and I went into the head shop, Julia with her blue nail polish opening the door and me right behind her admiring her glossy calves curving out of her blue dress—really, they were like apricots after a rain—but that was the last time I looked at Julia, at least while she was wearing her own head.

She wandered down to the music section where the metal-heads heads were, naturally enough, made of metal.  Rocks for rockers, big band lovers were tubas and trombones.  The shiny Christmas wrap puzzled me until I realized they were the rappers and the Christmas albums, the kind my parents used to have a lot of; you only knew which was which when you put it on.  Jazz heads were made of smoke.  She looked funny with that one on, indistinct, but her voice was incredibly sexy, like whiskey and dim bars and people about to do things they knew they shouldn’t, so when she said to me in that sultry voice, Put it on! about an older woman with black hair and a skunk streak of white down the middle I couldn’t resist, despite the big nose and bigger ears; this woman looked like she’d been stretched from Playdough.

I slipped it on, laughing, but my laughter sounded weird inside my new head, like I had a cold; I’d forgotten how dislocating the whole thing was.  She snapped a picture with her cell phone and posted it to her Facebook page and then one of the two of us standing together, my smile looking forced, hers a smoky crescent.  It was odd; I felt veins popping out on the back of my knees, a heaviness in my stomach that told me life wasn’t going to work out as I’d hoped.

Next Julia became a bald middle-aged Middle-easterner, and I could tell she was disgusted by me, so I switched to a jowly buzz-cut straight arrow guy whose hot breath smelled of moist clay, and now I could disapprove of her, but that didn’t last long, because she became a school-teacher-looking woman who disapproved of everything and I was reduced to a boy who hadn’t done his homework and had a persistent need to go to the bathroom.  I couldn’t get out of the kids department fast enough, especially walking with my legs pressed together, but even as a six or seven year-old I knew we’d taken a wrong turn; dates weren’t supposed to be a competition.

I went female again (a big blond) believing that might steady me, and she became me, which I didn’t think was playing fair.  My head wasn’t for sale or rent, after all, not even as a layaway, I’d simply left it on the counter while trying on others, but there she was, me, and I wasn’t her, I was just someone she wanted to fuck, or that I wanted to fuck, since she was me.  Had my lust always been so obvious?  I found it all very confusing and I didn’t like it one bit and I didn’t think it was reasonable.  I hadn’t wanted to fuck her when we came in.  Well, a part of me did, but that wasn’t all of me, not even the biggest part, and I felt that she was missing a lot of me.  I mean, I had wanted to tell her about her calves and that her laugh reminded me of pumpkin pie and that listening to her talk made my stomach feel like a pool of warm butter until that shits and giggles comment, which I hadn’t liked.  But I loved the CD she’d burned for me, especially the last two songs by Wiped and the Ball Huggers!

Yet now wasn’t the time so I put her head on and became her and I liked it a bit more, I wanted to get to know her, but still I didn’t like it enough, partly because in wanting to get to know her I thought I might really be getting to know myself, since she was still me (which made my legs tremble, or rather hers, since I was she), and I was certain the date was over.  I mean, what’s the point if you know how they feel?   You want a connection but you don’t want you.

This changing heads thing, I don’t think it’ll ever catch on, at least not on first dates.  For the first few you should be you, or the you you want them to think you are or that you wish you were.  Over time, you can be the real you or go completely different—a farmer and a toupee salesman, or an astronaut and a cheerleader; by then you’ll already know each other, and playing around won’t be so confusing.

But it was.  I was wobbly, a wounded tuna surrounded by the sharks of alien emotions, and I looked until I found it, the head of someone who’d once known his way around the world, sort of a Marlboro-looking man, mustache and all.  It took a while, and several adjustments, but after I got it on I stood looking at her and Julia didn’t seem to like it, which was okay, because I could no longer see anything all that attractive about her out of my new eyes.

Then I remembered that she was me and we were on a date and that I must have liked her at one point, so I shook my head, hoping I was just taking time to adjust to the new head, or perhaps was suffering from blurry vision, but the head-shaking thing was a mistake.  For the first hour with a new head, you’re not supposed to make any sudden movements, and we’d already cycled through half a dozen, so a certain dizziness was to be expected.  Eventually she swam back into view and now she was herself again (her hand was resting on my head on the counter, blue fingernails combing my hair into place), but I was slow on the uptake and by the time I figured this out she’d turned and left in a huff, which made me really really sad.  Those calves!  That laughter!  That lovely voice!

But another voice told me, You made the right choice.

It wasn’t my voice—my head was still on the counter—and it took a minute before I realized it was my new voice, deep inside my new head.

It went on, gravelly and mature, telling me that everything was going to be all right.  That girl, my new voice said (and the longer I listened the less it echoed) that girl would have been nothing but trouble.  She brought you in here, didn’t she?

I nodded.  Slowly, so the world would stay level, and it did.

Good.  Then let’s get out of here.  Though I didn’t have a cigarette, I could smell smoke, and for the first time in my life I wanted one and headed for the door.

But what about my head? I said, looking at me on the counter, propped slightly askew by the register.

Forget it, my new voice said.  In all the years you’ve had it, have you ever really been happy?

I said I had been, many times, though when I tried to recall happy memories none came to mind.  Or none I recognized.  There was one about playing pool in a smoky bar with a tall woman in a snap-front denim shirt and a white ten-gallon hat, but I couldn’t place it, or the one about breakfast burritos with onions and Tabasco sauce in a sunny Southwestern plaza.

Really? the new voice said.  You’ve been happy?  Then stop here and look at yourself.

I did.  Something was off about me and it took a few seconds until I had it: my hair was parted on the other side; it must have been Julia.  While I was trying to figure out what was up with that, the new me said, And if you’ve been so happy, what are you doing with me?

I was just trying you out, I said.  But even in my new, assured voice, the words didn’t sound convincing.

Trying me out, huh?  Well then try me out some more.  You’ll still be here if you ever change your mind.  Trust me, I said, watching myself frown as I passed, no one wants to be you.  That head thought Julia was a good idea, and she’s the one who walked out on you.

Right away, untroubled by doubts, my new voice said, Good.  Now let’s go down to the body shop and whip you into shape. 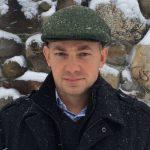 Paul Griner is the author of short story collection Follow Me and the novels Collectors, and The German Woman. His work has appeared in Ploughshares, Playboy, One Story, Prairie Schooner, Tin House, Narrative, Story, Bomb, Zoetrope, Glimmer Train, The Indiana Review and New York Tyrant among others, and been translated into half a dozen languages.
Previous Post"My Son the Dragon" Next Post"Question Authority"

"My Son the Dragon"

Kindergarten “I’m a dragon,” my son says to me when I pick him up from his daddy’s house. He’s in his booster seat, and I can see him in the rearview mirror. His skinny arms are held out stiffly in front of him. “Mommy,” he says, drawling out the vowel. Mo-o-o-o- mmy. “I’m a dragon.” “If you really were a dragon, you wouldn’t have to tell people,” I say. “We’d already know.” “How?” “Well,” I say. “Dragons look like big lizards with wings. They have huge claws and they blow fire out of their mouths. And they have tails.” “That’s like me. I breathe fire and have a tail and everything. But you didn’t know I was a dragon. You didn’t know.” He chokes up, his cheeks reddening, but he doesn’t cry. When we get home, I let him have sips of my cola. He burps, loud and long, a rumbling wave of gastric juices. “Fi-i-i-i-re,” he says. Sixth Grade In shop class he makes a pair of cardboard wings. He uses bungee cords to strap the wings around his torso. He wears them to school every day. After a week, the counselor calls, asking for a meeting and his daddy’s phone number. “He’s just being silly,” I tell