Her body formed a tiny ripple under the vast sea of bedding. A quilt she had sewn thirty years ago lay folded and undisturbed at the foot of her bed. Mildred closed her eyes and prayed the same prayer she had most nights that month. Please, not tonight. Please just let me sleep tonight. But like most nights that month, the sudden storm of bass unleashed from her neighbor’s stereo washed away her quiet pleas.

She tried earplugs and white noise. Warm milk and herbal teas. She tried to will her heart to beat in rhythm with the shaking walls. She tried imagining she was young. So young that the music seeping through the walls would be familiar rather than frightening. She’d even left a message for the landlord. These attempts left Mildred awake and staring at a faded photograph framed upon the wall. They were just young girls pretending to be grown, posing with their ponytails and tan lines at The Pike, getting ready to ride the roller coaster out over the ocean.

Ages ago there had been someone else to pay the bills, mow the lawn, fix a blown out pilot light, pump the gas. First her parents. Then there were men. Strangers, boyfriends, eventually a husband. There had been a time when she could be a leaf gently fluttering instead of a root holding tight to the earth.

Shaking her head, Mildred emerged from the depth of her blankets. It wasn’t going to go away. She slipped her knotted toes into her house shoes and wrapped her frame in her bathrobe. It was time to save herself from drowning in a deluge of noise. After a few deep breaths, Mildred opened her door and took careful steps down the hallway towards
her neighbor’s unit. Her fist was little more than a weathered stick drumming on his door until he finally emerged. A gentle heat exhaled from his apartment.

“Hello, Mr. Perkins. My name is Mildred. You recently moved in?”

Mildred could not hold his gaze. Her eyes drifted past his surname inked in Old English script across his chest and settled on the open case of beer beside the single recliner centered in front of his television. “Please turn down your music at night.”

“I’m sorry, lady, but I put in ten hour shifts. I get home, play my music, relax a little. That’s what I do. Nobody else is complaining.”

“Ten o’clock is not late. When it’s actually late, I’ll turn it off. Until then, turn down your hearing aids if you don’t like it.”

“Lady, just go home and do whatever it is that you do. Watch your soap operas. Stare at pictures of your grand kids. Whatever. You do what you do. I’ll do what I do. Get over it.”

Mildred wanted to explain that she had no grand kids, that there was nobody left in this world that she loved, but the door slammed before she could begin.

Carefully, Mildred stepped back home. She took off her bathrobe, slipped off her house shoes, and stretched out her knotted toes like a cat waking up from a nap. She got back into bed and stared into the darkness above her and tried to pinpoint the moment she had ceased to matter.

Mildred ran her fingers over the soft ripples of her stomach. She felt the loose skin on her neck and remembered how it felt to be kissed there. She cupped her breasts and remembered how the men used to stare. She had been beautiful once. Platinum blonde and red lips. Strong legs and rounded hips. Back then he would have turned off the music.

Mildred picked up the phone and dialed information. When prompted, she stated Perkins. Three seconds of
silence, then an offer to be connected by pressing the pound key.

Above the music his voice came through, “Hello?”

Mildred imagined she was a starlet in one of the black and white romances she used to watch at The Warner Grand. She turned on her bedroom voice, “I need someone to talk to tonight. Will you talk to me? I’m all alone.”

“I can make you feel good.”

“Look, I don’t need your name. I got your number. You do know that it shows up on my phone, right?”

“You can have my number, baby. Call me on those nights you can’t sleep.”

“Who put you up to this? Pete? Thanks for the offer and all, but I’m hanging up.”

“Alright, sweetheart. You got about ten seconds to get me interested or I’m hanging up. Let’s see what ya got.”

Mildred pictured him in a thin white t-shirt. Work boots. Rough hands. The old rush came back to her. She felt the rhythm of the music push through the wall and told him all the things she wanted to do with her tongue, her mouth, his hands. He lowered the music and she heard his belt buckle hit the floor.

Mildred listened to his breath quicken. It came out short and fast. She told him everything he wanted to hear. She needed to leave him spent.

When his groaning peaked, Mildred waited for that final exhausted grunt then hung up the phone. She placed her palm against the cool plaster of the wall behind her head. The stereo went silent. The wall went still. Mildred pulled her nightgown back over her knees and fell into the strong arms of sleep. 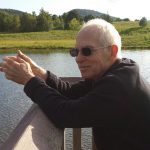 “It looks like cancer,” Mildred said over the scratchy cell phone. “She’s covered with it.
edaylew

J.D. Shoemaker is a sixth grade English teacher living in San Pedro, CA. Her mother gave her a typewriter on her tenth birthday. It is the best present she has ever received. Her fiction has appeared in Lunch Ticket, Blue Skirt Productions, and Microfiction Monday Magazine.
Previous PostFlash Audio Series: Spider Webs Next Post"Unfathomable Scope: Emily Nemens' Butcher Papers Review"

The Flash Audio Series features audio versions of stories published on our site. In this segment of our series, Eugenie Montague reads "Spider Webs."