When I started my novel, Cradlesnatch, I estimated it would be around 50,000 words, which is normal for a YA novel. However it’s looking like the finished draft will be more like 90,000 words, which may be too long in the eyes of publishers.

So I put my brain to thinking about how to reduce the length of my manuscript without losing any of the story elements. Happily, while I was still cogitating, I happened to watch the old Planet of the Apes film. There is a scene in the film where George Taylor is trying to write in the dirt, so the ape scientist, Dr Zira, will realise he’s intelligent. However,Nova, the girl who is with him wants to rub the words out. A lovely example of goal and conflict forwarding the action.

But in film every scene has to pull it’s weight. So, before the girl rubs out the letters, Dr Zira, is distracted, first by her fiancée, Cornelius, who arrives and gives her a kiss, and then by a conversation they have with Dr Zaius, the Minister of Science, about Cornelius planning an archaeological expedition.

All this is in conflict to Taylor’s goal in the scene. But it also reveals Dr Zira’s relationship with Cornelius, and introduces an expedition which becomes important later in the plot.

And it doesn’t end there. When Nova begins to scrub out Taylor’s writing, a fight starts between him and another male. The guards are called and we hear Dr Zira say ‘Stop! You’ll hurt him.’

This clearly states her sympathetic view towards humans. As Heston is dragged off, a gorilla guard says ‘What’s Dr Zira trying to prove?’ to which Dr Zaius replies, ‘That man can be domesticated.’ The gorilla’s laughter is all we need to understand the normal ape view of humans.

The scene ends with Dr Zaius looking at the remains of Heston’s words and scrubbing them out with his cane, suggesting he knows more than he’s lets on.

The scene is like a lasagne, with one story element layered on top of another. Nothing goes to waste. So it’s time I revisit each scene in my novel. Do I have one scene which establishes character, another which sets up plot, and a third which forwards the current action? If so it’s time to mix it up and make my scenes work harder. Hopefully there’ll be plenty of left-overs I can scrape into the editing bin to get my over-weight manuscript nice and trim. 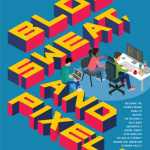 ‘Blood, Sweat, and Pixels’ Brilliantly Lifts the Veil on the Difficulties of Making Video Games

The process for creating a work of art (or a piece of entertainment, if you prefer)
petite

In a fit of youthful enthusiasm Lorrie Porter graduated from University College London with a degree in Ancient World Studies then went on to qualify as a teacher in Classics. She loitered for many years in a solicitors’ office where she spent a lot of time staring out of the window. However, her fascination for dead languages and civilizations continues to thrive. She graduated from MMU with an MA in Creative Writing. Lorrie writes fiction which embraces a dark and emotional aesthetic and is currently working on Dead Boy, an adventure set in bygone London. Her other novels are Cradlesnatch, a story about a monster who steals children and Fury, which has wolves, bandits and other miscreants among its pages. Lorrie lives on a narrow boat with her talented husband and impervious cat.
Previous PostThe Story Behind the Story: "Okay But Will You Anyway" Next Post"This Is What We Do"

The Story Behind the Story: "Okay But Will You Anyway"

First and foremost, this is literally how I proposed to my wife. Not as it happens in the story, of course, but by writing her the story itself, and then giving it to her for New Years. But still, I feel like you have to give me some points for that. But probably more points to my wife for still saying yes in spite of all that and everything else she has to put up with. - I had been reading too much Bukowski. And at thirty-four, I was much too old to be just now discovering old Buk, but I had long avoided him because of the types of sad-bastard stories I’ve read over the years from writers who profess to worship at his sad-bastard altar (which you are probably now thinking the same about me as I write this). But as in “Okay But Will You Anyway,” I tend to write a lot of fiction that’s some version or me or my uglier alter ego, and at the heart of most of my stories, I tend to play the bad guy or at the very least the butt of my own brutal jokes, so a friend of mine had gotten on