You’ve been in traffic for two hours. It’s been rain the whole way.

Your wife is probably waiting in the kitchen. She’s probably wilted over the stove while the food simmers on low, sipping the heat between her cheeks. Wondering why you never called.

Her room was rotten white.

You left her there–to be old among old, sick among sick, to wait among the already waiting–

-and for who knows how long

Someday, you’ll be waiting, too.

Here, it took her forever to sit down, to get from one resting position to another. You held her by the elbow and focused your eyes on a curl in the curtains while she bent each muscle on its own. This is the nature of neurodegeneration, disease with a desire to possess.When she finally lay, her chest moved like spitting cotton, thirst you can’t quench; you tucked her in, looked at her,

You wonder now if your mother will find peace. If anyone could in such a space. Or if anyone does, anywhere, or if there’s ever even a time for peace in a person’s life, or if it’s all running, to or from something, until you arrive there, in that rotting room with no sound or space to claim for your own, except for your own body, and you’re losing that, too.

But your wife wonders something else. Something both parallel and perpendicular.

And she’s not in the kitchen, she’s playing the piano–which she hasn’t for years to your knowledge. Regardless, she’s never forgotten the notes.

It’s a song her mother taught her. She wants to teach it, too. She’ll tell you so when you arrive.

She’ll say, “Don’t you want something of your own?”

You can see her,  your daughter, if she were to be. She’ll sit at the piano and play the notes from her memory, eyes trained on hands–you’ll think, what if this music, like language, is a lesson she learns, but never feels? Never knows in its entirety? She can’t play every combination of notes she needs to hear, only what she’s given, the ones you taught her; and this is forever, this shrinking from small to smaller, until she leaves like she came, like your mother, starving for the wholeness they can’t have, for the knowing of what they’re missing.

And you’re scared. Of life. Your own, mostly, but also most everyone else’s; and you can’t do it, nurture something into suffering with nature, teach love without learning it for you.

And what if she, too,  should realize this, at only 21, while driving back for july to a home that is hers only briefly, and she calls you twice before she spins off into the rail–a traffic jam will follow, the late rush, the very one you’re sitting in–and people will talk of nothing but inconvenience til they marvel at the wreck–and you’ll think, what if

That’s somebody’s child. Somebody’s lover. Somebody’s friend. Someone who had someone waiting, too.

-the spilling of sky

-the awaiting of something new

-the gap that must be filled

-the question that’s to come:

can you fill two at once?

I’m sorry. You’ll tell her so in sixty minutes. With sixty steps from street to stove. In sixty days, she’ll leave.

But for now, drive. Don’t stop. To stop is to deny the need for arrival.

Listen to what the rain has to say.

-the erratic movement of particles suspended in excess

-cell-death that is predetermined.

It’s not undecided, but it is, and you are.

You’re on your way. You’re going to get there soon. 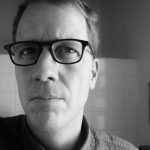 18 yr old from Denver, CO.
Previous Post"On The Ferry" Next Post"No Access Beyond This Point"

“Sorry,” the young woman whispers to the man on her left. “Yeah?” he replies. Both shielded behind their sunglasses. Late afternoon. The row of outside seats on the ferry to Besiktas* . The sounds of the waves. A sweet, tired sun. Kadikoy* remained behind. Lined up across from the sea are Haydarpasa*, Harem*, and Selimiye*. Passengers become tipsy from the blue breeze, and can’t help putting their feet on the rail and closing their eyes to seize the moment. “Are you married?” The man becomes puzzled and studies the woman. No weird intentions or nothing insidious in her voice. He wouldn’t call her beautiful. Nothing is definite about her. Only a crystal solitude. “No, I’m not,” he murmurs, with a small question mark. The waves are refreshing the souls. Lovers’ dreams are fluttering over the sea. The port is over there. “Have a girlfriend?” The man hears sincerity. The kind he was longing for; without a curtain. Nothing in disguise. He thinks what’s the big deal. “No, not these days.” Her nail polish marks a red trace of loneliness. She’ll go back home alone at night, and expect help from her mobile; will keep checking messages, and who shared what. They’re passing by Uskudar*. Old houses, looking