Brennan says that at the end of Kneel Down Road, we might see a ghost.  We are in Brennan’s dad’s Chevy Dually.  Brennan’s dad is in a coffin six feet under the soil of Zion Hope Cemetery in Sparta, Georgia. We have been driving around half the night.  His dad was killed in Afghanistan three weeks ago. IED.  It was on the news.

I light a cigarette and squint down the dark road.  Pine trees.  Kudzu.  Undergrowth.  Scrub.  No controlled burns this far out in the county.  I have no idea who owns this land.  No man’s land I think and chuckle at my private joke.  Ludacris’s “Grew Up a Screw Up” thumps from the truck’s speakers, and Brennan nods his head with the beat.

Brennan turns the headlights off and starts laughing, a chuckling fit that quickly becomes some mixture of hiccups and sobs.  I say nothing and sip my Natural Light and try not to worry.  He floors the truck, and I sink into the seat, fighting to be cool, nonchalant.  The night washes over the truck.  I picture us wrapped around an ash tree, decapitated by a low-hanging branch.

We park halfway in the ditch and climb out, kicking empty cans onto the road.  The Dually sits at a .45 degree angle, and I look at him.  “It ain’t going to fall,” Brennan says.  He reaches into the truck’s extended cab and gets a beer.  Then, he crosses the ditch to the other side.  Around his neck, his dad’s dog tags chink together.  I get a beer, too, and follow him into the undergrowth.

The black church used to be called Holy Truth Primitive Baptist, but everybody in Sparta calls it the haunted nigger church.  We walk through the pines and pecan trees, our feet crunching on the forest floor.  At the edge of the church clearing, we stop.  I can hear Brennan breathing, nearly heaving, the way he did when he told me that his dad died.

“Fuck you,” Brennan shouts, and the night swallows his voice.  “Fuck you, ghosts!  Come on out and get us!”  He shotguns the beer and spits it into the air.

I think Danielle Yowell and Tracey Banis, the two hot girls we left at Hardees to go driving around tonight.  Brennan said he was bored with them.  Said he wanted to just drive.  But Brennan hasn’t been right since his dad died.  I’ll try to make nice with Tracy Monday morning before first period.

“There ain’t no ghosts out here,” I say and look up.  No moon.  The sky hangs low and heavy like a quilt, but the clouds are thick.  No refracted moonlight.

“Tommy Sanders said he saw a ghost out here one time,” Brennan says.  “Some old black man dressed like a priest.  Tommy said he was all glowing.  Said he just stared.”

“Tommy or the ghost?” I say.  I want to leave.  The humidity clings to my arms, makes me feel heavy.

“The ghost I guess,” Brennan says.  He picks up a pine limb and sends it spinning, end over end, at the battered front doors of Holy Truth Primitive Baptist Church.  The limb smashes into the side of the church, damp chunks splintering.

I nod, but he can’t see me.  I agree with everything he has to say. 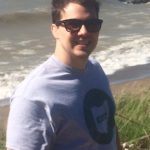 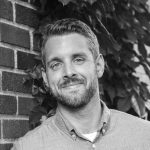 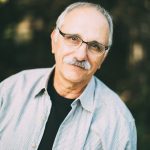 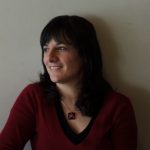 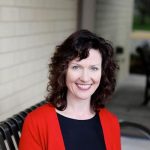 Jeff Newberry tells stories in poetry and prose and teaches others to do the same.  A native of the Florida Gulf Coast, he  is an essayist, fiction writer, and a poet. His most recent book is the novel  A Stairway to the Sea (Pulpwood Press). His is author of the poetry collection Brackish(Aldrich Press) and the chapbook A Visible Sign (Finishing Line ). With fellow Gulf Coast native, Brent House, he is the co-editor of the anthology The Gulf Stream:  Poems of the Gulf Coast (Snake Nation Press). His collaboration with the poet Justin Evans, a book of epistolary poems entitled Cross Country, will be published by WordTech Editions in 2019.  He reviews books for The Florida Review ​and other publications.
Previous Post"Chief" Next Post"Good, Brother"

Obvious nickname for the boy with the Mohawk. When it grew back in after the miracle of graduation—his famous whoop across the stage—he was still then and always, Chief. He grabbed his diploma, and promptly disappeared into a chemical haze. His acne scars deepened into tribal markings. If we sneered a bit, he didn’t notice, pumping the gas into our new cars we’d helped build in the factory and would pay for forever. He bent down to push his nonstop stutter-chatter through the slight window crack. Kevin Coker. His eyes shrunk into glassy pink slits of stoned-out—not bliss, what was it? If he’d been smarter, he could have at least started dealing. It didn’t take smart to work in the factory, but you had to tell time and not get hurt. How could he get fired from Green-Top Lawn Spray? All he had to do was run the mowers and spray the poison. All the people wanted was thick green grass in the high distant suburbs. Living in our neighborhood was poison enough, and weeds were welcome with the self-defeating love of our deluded nostalgia. He drove the car that killed Dave R., crossing the center line on a dark two-lane in