A little girl of maybe four or five. You can tell by her Spongebob one-piece bathing suit, her sassy mouth, her messy hair. She runs down the sand with her duck float under one arm and jumps into the sea. A few minutes pass, of waves and foam, and she’s bobbing out toward the sand bar when the first shark fin appears. Another joins, and another, until a half a dozen circle her in a narrowing gyre. She screams. She squeezes the head of her duck float until the eyes bulge. She tries to climb on top of it, but it tips dangerously. “Daddy!” she cries. The sharks nudge her skinny legs. They eye the chipped red polish on her toe nails. She cries for her mother next. Then out to the world.

On the beach the sunbathers stand, shading their eyes.

A man runs for his boat. Another has a pistol in his Ford so he heads for the parking lot. A brave woman wades into the water when from behind, a rush of other kids, dozens, swarm into the shallows with their own floats. Some are older, teenagers. Some are the sunbathers themselves. All of them flail about, screaming for help. One boy has salt water in his eyes and it burns. Another wails because he forgot to take his wallet out of his pocket before he dove in. A girl cries because her best friend won’t come in the water. Others have nothing wrong but shout anyway.

A woman selling ice-cold cherries walks along the shore. The gulls dive. The watchers on the shore hold their ears. The sea is so full that they don’t see or hear the first little girl. She has grown quiet and unimportant because the sharks are tearing her legs off.

A little girl of maybe four or five floating on a duck-shaped raft in the waves and foam. Her messy hair is wet and matted to her head. First one shark fin appears, then five more join until she is surrounded in a narrowing gyre. They look like the blades of box cutters opening the green skin of the sea. She screams for help, high pitched little bleats that melt the heart. She calls for her father, for her mother and sister. On the beach, the sunbathers stand. They squint against the white sun. A man runs for his boat, another for his gun, a woman starts wading out, determined to pull the sharks off one by one with her bare hands. Then one of the sunbathers at the back of the crowd throws up his hands. He’s rolling his eyes and shaking his head. “She’s a liar!” he says. “You’re all dupes. I watched her play on the sand earlier! She was claiming those shells were pirates and that lump of mud a castle.”

The woman in the shallows hesitates. The man going after his boat turns. The sunbather at the back starts to chant, “Liar! Liar! Liar!” He sounds so sure of himself, the others join in. The man on the way to his car hears and heads back, gunless. He feels used.

A woman weaves among them selling cold cherries. The gulls circle and dive. The little girl’s screams get fainter, lost among the chanting. She sobs to herself now, alone in the deep water. The sharks nudge her feet.

“Look at her!” says the man who’d started for his boat. “Doesn’t she know about the boy who cried wolf!”

“She doesn’t even come from this part of the beach!” says the woman in the shallows.

The girl is silent now. She’s dead in a widening splotch of red, her legs torn off. When the shark fins surface close to shore, the sunbathers on the beach tell themselves these are fake, too, toys put in the water by the lying little bitch. And when the body parts wash up on the sand, they kick them back down into the water and say they are Halloween props. No one goes in the water. They lie face up toward the white sky, oil sizzling on their skin.

A little girl of maybe four or five in a float shaped like a duck and she’s surrounded by six sharks closing in. Someone on the beach gets tired of hearing the girl scream for help. “I can’t focus on my goddamn book,” she says. “Why did she swim out so far in the first place? Any dumbass knows there are sharks in the sea.” Her husband has a cold Coke. He says, “She should be spanked for being such a little moron. We should drag her back in and beat the shit out of her.” They think of the stupid parents, how they can’t control their daughter. They lay back on their towels. The sun is a ball of sparks.

Their neighbors stand. They stare uncertainly at the water, the red froth. Are the couple wrong? The girl should have known better. The parents should have stopped her. That was true. No one could argue with that. What would they be doing by saving her except enabling her, helping her continue to be so stupid?

The girl. The sharks. The people sunbathing on the sand. They stand. Someone starts to go for their boat, another for a gun with six bullets for each prehistoric fish. One man is at the edge of the water with a megaphone. “She’s a terrorist!” he says. “She burns Bibles! She pulls the legs off lizards!” The sunbathers look hard out at the sea. They shade their eyes. The light is harsh and white, shooting off the waves like blades. When the blood and body parts appear, they feel relieved. They’ve been saved. The sharks were coming for them, but now they are sated.

They lie peacefully on the sand. They oil up. A woman weaves among them selling cold cherries. Red pulp, slick white teeth. Gulls dive. The body parts wash up on the shore and they nudge them back with the soles of their feet. Blood stains appear where the surf touches their towels. The shells rattle against one another, gently. The sunbathers turn face down in the sand, their backs to the sun. In unison they open their mouths and close their eyes. The beach is the earth and the earth is a grave. They fill themselves with sand. 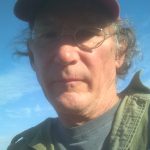 The Story Behind the Story: “Therapy Dance”

I am fascinated by the index of psychiatric disorders commonly known as the DSM-IV, which is amazingly large and
leekisling

Jeffrey Gibbs was born in rural Florida and has lived all over the world, most significantly in Turkey and Japan. He earned his MFA from the University of Arizona and has had short stories and essays published recently in Eclectica, A-Minor Magazine, The Opiate, Word Riot, Entropy, and Little Fiction Big Truths. He is currently working on a short story collection of dystopic tales set in Istanbul.
Previous Post"The Reckoning" Next PostThe Story Behind the Story: "Carve This Flesh From Off My Bones"

I was four years old the first time I beat my mother at Scrabble. She loved the game and fancied herself something of a master, goading my father into games on weekends, and hosting parties for her girlfriends once a month. The ladies would drink and smoke, talk about their husbands and then turn serious for Scrabble. Not Words with Friends like the ladies played in secret on their phones. Not my mother. She was old-school. She liked the feel of the tiles: their smooth, polished wood, the grooves of the letters, the weight in her hand. They bet bits of money, those ladies, stacks of silver and copper coins, and my mother, though the consummate hostess, almost always won the pot. She’d wait until the ladies left before sweeping her winnings into a jumbo-sized coffee tin, the clang-clang-clang ringing brighter as the tin filled higher and higher. She never spent any of it. That coffee tin was still there, on the high shelf in the living room, brimming full after she died. I was supposed to be in bed when the ladies arrived, but I seldom was. I’d watch their games from the top of the stairs and quickly learned the