The Flash Audio Series features audio versions of stories published on our site. In this segment of our series, David Boffa reads “Aroo in the Night.” 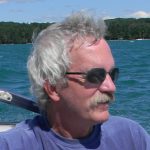 Originally from New Jersey, David currently lives in Wisconsin, where he teaches art history at Beloit College. He has published fiction in SAND Journal and non-fiction around the web and in print. Though he misses the ocean he is finding the Midwest to be "eminently livable," to quote a friend of his.
Previous Post"Joe the Indian" Next PostCutting a Window in the Self: Mindfulness and Mania (A Review of David Ebenbach's Miss Portland)

When I was 17, I went with some guys to an Indian’s house. He was a real Native American Indian. His name was Joe. He worked in a plant nursery and lived in a cedar cabin next door to it. There were antlers on the outside of his cabin and weeds in the front. I went there with the guys for pot. I stepped into his dark living room and into the pictures of his ancestors. There was not much else. Just them, dead ancestors in feathers hanging from his paneled walls. Some artifacts here and there. A recliner and a TV and a lamp. I asked one of the guys if I could use his bathroom. I didn’t ask Joe. He didn’t seem to know I was there. His bathroom was pink. There was a porno mag on the toilet and I stole it, hid it under my jacket. It didn’t belong there. Joe didn’t belong there. The guys told on me the next day and said Joe wanted his magazine back. They said if I just returned it he would forgive me, and I wanted his forgiveness. But I had never seen a magazine like that. I saw a video when