I work from a small room in our loft, and Alice is always after me to get out more. Sometimes in the middle of the night she will come to my door in her nightgown and say David? And nothing else when I look up. At other times she will say something about how even in sunlight I look like I’m bathed in computer screen glow. Her own office is in a building down the street near the art galleries. Sometimes I’m just coming out for some sleep when I see her dressed and sipping coffee on her way out for a day of grant writing.

You would think that her sitting there all day looking out at the galleries would make her want to get away from that whole area when she is off, but yesterday evening she told me there was an opening she wanted to go to. Some guy with a made-up sounding name—Jorge SanRita. I’d never heard of him. She had gotten dressed for it before she even told me she wanted to go, like I was free to stay home and work or go out. Up to me. She looked real nice in her purple scarf thing and her new earrings. Tiny silver wire tornadoes, dangling.

I put on a jacket and my better shoes and we headed for the gallery a few blocks away. In the late evening light it looked like a big rectangle of light cut from an iceberg.

The show featured dioramas. The works were cubes of concrete about the size of a microwave oven, and they were solid, except for a small scene at the center. A thin, slanting tube provided a view of an interior set, and a card by each piece noted that the battery powering the lighting inside was also permanently embedded in concrete.

Alice was moving quickly from one piece to the next, but I stayed looking closely at one for a while. It showed a sparsely furnished room in what looked like an old hotel. A balding man sat on the side of a bed in dim light, a suitcase standing upright near his feet. He wore a suit and his posture was oddly straight, like he was thinking hard about something. Trying to make a decision, maybe.

When I finally looked up, the light glancing off the white walls all around was almost painfully bright, and I didn’t see Alice anywhere. Then a group of people parted and I saw her talking to the SanRita fellow. Tall guy with hair like gray feathers.

I pulled her away and asked her why she was always drawn to the sad shit.

Alice stopped and looked at me. She said she didn’t know. Then she said it was like the feeling of seeing everything at once instead of just the parts that are merely tolerable. I said I didn’t have any idea of what she was talking about, and that I wanted to go home. Can’t we just go home? I asked her. But Alice said she thought she would stay. Some people she knew were going across the street for drinks in a while and she thought she would go with them. Fine, I said. And I turned my back on her.

I walked slowly on my way back to the loft, half thinking I would look around and see Alice walking a little faster so she could catch up with me. By the time I got home and went up the lift to our door I was seriously irritated. I started thinking about Alice and the artist, probably already laughing it up at the restaurant.

I tried to get some work done, but I kept thinking about the whole evening and how things had gone. And the more I thought about it the angrier I became. After a while, when Alice still hadn’t returned, I went and locked the door and the two deadbolts and the slip chain, like I had decided to go on to bed. She could just ring when she wanted back in. And I would take my time getting there. I sat in blue screen light for a long time before I could settle down enough to get back to my coding. 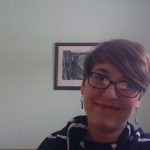 Why I Write: Barbara Harroun

Because epilepsy was the first stone I threw. The first word that made someone who wasn’t family cry. And cry she d
bharroun

Daryl Scroggins taught fiction writing and literature for a number of years at The University of Texas at Dallas and The University of North Texas. He and his wife, Cindy, now live in Marfa, Texas. His poems, short stories, and creative non-fictions have appeared in magazines and anthologies across the country, and his most recent book is This Is Not the Way We Came In, a collection of flash fiction and a flash novel (Ravenna Press).
Previous Post"Fly Season" Next Post"Lowlands"

In a room without furniture, the flies have nowhere to land. They flit from wall to wall, winged dirt, smearing the air around them. Alice stops in the middle of the room and drops her bags to the floor. The village, her guidebook says, is drab and hot as blazes. It has the distinction of being a big producer of manioc root. Its name, in Malagasy, means “waiting for a wife.” From her front porch, she watches flies crawl across an old woman’s face as she naps beneath trees. Alice cannot name this strange flora. The landscapes of the southern hemisphere are illegible to her. The old woman’s mouth twitches in her sleep. They say it is too hot for fleas. On the plateau, where temperatures dropped to the low 50s in July and she had shivered through rushed bucket baths beneath unfamiliar constellations, there had been fleas. Her empty house was once a classroom. It smells strongly of chalk. From her backpack, Alice pulls out a stack of photos and a roll of tape. She arranges photos on her wall, centering them in the dark rectangle where a chalkboard used to hang. She stops midway through the stack and looks at a photo of a man