The horse was born skinny. Its legs were flimsy poles ready to collapse at any moment, its body a thin coat of fur covering an oversized ribcage. The man loved the horse, and each day he offered the animal his lunch. It was the least he could do. But he lost weight from skipping a meal every day, and his wife grew worried.

“You’re nothing but skin and bones,” she said. “You need to eat something.”

“Skin and bones? You’re being ridiculous.”

But when the man touched his ribcage, his fingernail scraped bone. Tears dripped through the disintegrating skin on his face. His pelvis hurt, and he noticed a chip near the knob of his thigh, where starving ligaments struggled to keep his skeleton together.

“But look at you. Your skin’s literally falling off your bones. You need to eat.”

The next day his wife packed double the amount of food for his lunch, but still the man offered everything to the horse. And during the next few weeks, the horse learned to expect more. It stomped the ground, pushing the man’s hand with its muzzle and sniffing his pocket, impatient for the rest. If nothing remained, the horse, feeling cheated, would gallop away for the shade of its favorite tree and turn its backside to the man.

“We’re running out of money,” the man’s wife said. “We’re spending fifty dollars a day to feed the neighbor’s horse. And look at yourself. Your bones are breaking. You can hardly keep your legs attached anymore.”

“But there’s not enough grass over there,” the man said. “You’ve seen the neighbor’s yard.” He adjusted the duct tape around the bones of his kneecaps. It was harder each day to keep his skeleton together, and some mornings he lost a finger or toe between the bed sheets.

She refused to pack him another lunch until he quit seeing the horse. But the man couldn’t stop. The next day, despite not having a lunch to offer, he still visited the pasture. The horse trotted over and neighed. Its body was a rounded barrel now, powerfully built, its fur sleek and healthy. It could crush the man with a flip of its long, beautiful neck.

“There, there,” the man said, stroking its mane. “You’re hungry, aren’t you?”

He emptied his pockets. The horse reared on its hind legs, impatient for its food. The man removed his leg from his hip and offered a bone to chew, but the horse refused, scraping the ground. A moment later it galloped away for the shade of its favorite tree, but not before looking at the man desperately, as if there were something trapped inside and begging for release, something beyond anyone’s control. The haunting memory of the baby colt, the original skinny horse of bones and fur, would always remain, and no friendship could overcome the need to eat. Nature told the horse to grow, and the horse obeyed. There was no alternative.

The man knew what this meant. He crawled into a hole in the ground, where the horse had often rubbed its muzzle searching for more grass. This seemed like a long time ago. The man touched his hand to the remains of a hoof-print and prepared for the end. Nature always won. He knew this. He needed to accept the inevitable conclusion.

As he rested his skull on the dirt, he could almost hear the faint cry of something in the wind, and it came from a distant, unreachable place. 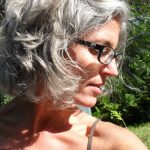 In the shopping cart, she found a grocery list. The handwriting was pleasant. A bit slanted. Curvy.
shelliez

About Nicholas A. White

Nicholas A. White is an MFA student at the University of North Carolina Wilmington. His stories have appeared in Permafrost, Pembroke Magazine, Pithead Chapel, and elsewhere. For more information, visit www.nicholasawhite.com.
Previous PostThe Story Behind the Story: "A Trail of No" Next Post"Playing House"

The Story Behind the Story: "A Trail of No"

A writer's life is fraught with rejection. In the face of continual rejection, of people telling you that your work does not "meet our needs," writers have to keep writing and sending work out for consideration.  Of course, we don't have to send our work out. We can write and write and never let anyone see or read our work; however, most writers say, "Why would I do that?"  A part of writing is the belief that we have something of value to say.  I love Richard Hugo's quote, "An act of imagination is an act of self-acceptance."  To be a writer, one must have confidence and resilience.  We must believe we have something worthwhile to convey; if not, why would we try to get published?  Why would we want anyone to read our work? When I first decided to become a writer, I thought publication was the goal.  As I sent out poems in college, I covered my entire dorm room wall with rejection slips before my first acceptance ever came in the mail.  It makes me think of the very long "trail of no" I have left behind me and ahead of me.  That sense of rejection has to