We slept in the same bed just that once, memorably, as it was so unexpected: I knew Gus loved my best friend more. On the road trip up I had watched his eyes dolefully follow Jen’s footsteps as she walked away to take her turn at the restroom while I stayed back with him on his short leash; flirting, I admit, because, honestly, it felt like he couldn’t stand to be without Jen for even a minute so it felt safe to imagine the flirts would go nowhere. He even moaned a little as she went off without him though I could tell he also didn’t want to hurt my feelings, “third wheel” that I was on this journey north to Maine, stopping frequently at rest areas to let Gus relieve himself, always first, though no one mocked his extra neediness. Gus had his dignity, and we aimed to maintain it.

Inn By the Sea on the coast near Portland caters to those like Gus who enjoy their amenities: welcomed into the dining room trailing beach sand after an afternoon romp at the edge of the waves, treats delivered without asking to the room at dusk, the best bedding; not to mention the delightful company of other guests of the Inn who appreciate such pleasures.

That night at dinner Jen and I indulged our every desire: oysters, champagne, chocolate, and more: generous rapport. Gus, on the other hand, was watching his weight and rolling his eyes at the fact they let children – of all creatures – into a fine dining establishment. Indeed, Jen and I felt trapped having to appear interested in the family at the next table, with their overly friendly menagerie of youngsters who were used to people exclaiming over their cute precociousness as they tried to impress Gus with their ball-on-a-paddle and yoyo routines while their parents beamed. It was all Gus could do not to latch onto the red rubber ball-on-a-string and tear it to pieces with his teeth, but Jen had trained him well so Gus behaved.

Following a last morsel of mousse and the departure-at-last of the annoying bright children, Jen and Gus went off for a post-dinner beach walk while I went upstairs to read Dostoevsky. I felt like an idiot: white terry cloth robe and slippers, after-dinner mints, Bocelli streaming through high-fidelity speakers, balcony, sunset view: super romantic and no guy of my own. Jen’s first marriage had lasted a lifetime: they met at age thirteen and stayed together till death do you part. Gus was new, an attempt to fill the empty space in her heart and bed with a new mate to care for, play with, reprimand, feel exasperated by, and love. Gus was no Bob, for sure, though he was more willing to obey if you used the right tone of voice. I claimed I didn’t want the burden, and most of the time this was true: I liked my freedom. I’d been married, done that; this was a whole new phase of life, uncharted as far as I could tell, no rules for what we were “supposed to do” now. Jen and I got together as often in the year as distance allows, for locavore food, excellent wine, wide open landscapes, and nonstop conversation. But it was hard: she was east coast, I was west, plus now she had Gus, who did not like to fly.

Gus burst through the door first, windblown, lively, his energy a mismatch to the spa ambiance I’d created. Jen looked tired but happy, with the vibrant glow of cool salty air on her cheekbones. All she wanted was a hot bath and her own terry cloth robe.

“You look so comfy,” she said to me, maybe a little jealous of my unburdened appearance, while I envied her willing ability to take Gus on and adapt her needs to his: companions, bedfellows.

She went upstairs to enjoy the fantastic Inn By the Sea bathtub and Gus moved around like a whirlwind in the room where I’d been reading my book, exciting the air around me with his good looks and dynamism.

Did I want one of these for myself?

The room was a suite, with two queen-size beds. Jen and I had been friends since college so over the years we had slept often in the same room while traveling, as good friends do, talking in pajamas into the night until one drifts to sleep with the other’s voice still going on about the urgent matter of the moment: our kids, world crises, where our next trip should be, our bodies, what to look forward to.

We were doing just that while Gus did his own bedtime routine. I am not sure which one of us fell asleep first or whether it was a dream when suddenly I felt this body on the bed beside me, warm comfort, muscular form, a shape molding itself around mine. I shifted, conscious or unconscious, not sure, making room for this unfamiliar feeling, though I could vaguely remember how it felt to be married. After my husband left I had slept with my cat Billy for years, until he died, but this was different: more substantial; I could feel the heart beating in rhythm with mine, the healthy breath, the desire to move closer against my resistance.

Even asleep I could imagine Jen’s feeling of betrayal if she woke up and found the two of us in bed together. Much as I may have craved unconditional love, even just for a night, I did not return the gestures of affection. Gus remained on top of the blankets and eventually started to snore at my feet, Good Dog. 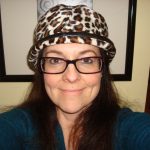 Marianne Rogoff is the author of the Pushcart-nominated story collection Love Is Blind in One Eye, the memoir Silvie’s Life, and numerous travel stories, short fictions, essays, and book reviews. In 2018, her writing was a Finalist in Narrative magazine’s Spring Story Contest, Top 10 for the Tillie Olsen Short Story Award, on the Short List for the Bath International Novella-in-Flash Award, and Top 10 for Sequestrum’s Editor’s Reprint Award. In 2019 her story "Attention" was a semifinalist for ScreenCraft’s Cinematic Story Award.
Previous Post"The Love for Writing" Next PostDakota Canon

"The Love for Writing"

I do not know why, but I do not see any demarcation line between classics and pulp fiction: both are, in my opinion, two brothers, one in the white collar job; while the other, tilting a small patch of land. Both of them are working hard. The only difference is that one has been admired by rank and file; while the other one only by the laymen. It is sheer by chance that horror fiction and fantasy too have, always, been marginalized by society and could never become a mainstream literature. The reason is simple: high society does not accept them. That’s why Abraham Bram Stoker could not be considered as a course syllabus material, irrespective of the fact, that he had power to sway the readers with his words. The same condition I do feel about Stephen King, whose mammoth work ‘Salem’s Lot’ could not reach the coffee tables of English professors. Some writers are lucky too that their very first work fetches some prestigious award. Arvind Adiga’s ‘The White Tiger’ and Arundhati Roy’s ‘The God of Small Things’ I can safely keep in this category. These works got ‘Men Booker Prize’ in 2006 and 1997 respectively. Mrs. Roy is considered