In Dr. Brooks Blevins’s class in Ozarks Literature and History, the first question a student asked struck at the heart of what I am wondering at now. A longing for the Ozarks, being away from the Ozarks, living in the Deep South, how does this separation affect my writing?

Last week, I had two reasons to head home to Springfield and the Missouri Ozarks. The Seventh Annual Ozarks Studies Symposium at Missouri-State-West Plains honored me as its keynote speaker and asked me home to read from my story collection Some Kinds of Love: Stories.And Dr. Brooks Blevins was teaching my novel,Morkan’s Quarry, in a class called Literature of the Ozarks and Literary History of the Ozarks (students can enroll in the class for credit either in English or in history).

For a living, beginning author, to have a novel taught within a university setting as part of a body of literature, this seems miraculous to me. Most writers have to be dead for that to occur. Morkan’s Quarry is but three years old now. In book years, though, that is moldering-in-the-grave old. Driving home, my wife and I reflected that had either of the two New York agents who burned themselves out trying to sell Morkan’s Quarry, had they succeeded and placed the novel with one of the five remaining publishers in New York, the novel would now long have been remaindered, pulped, and gone. For, while it made happy money for me and for Moon City Press, it did not achieve what a New York publisher requires for success. Had I not found the perfect boutique publisher in Moon City Press, which keeps the book in print indefinitely, Dr. Blevins could never have taught it. Most New York publishing houses pulp a novel deemed unsuccessful within six months. Now, three years after publication, thirty students have read Morkan’s Quarry, discussed it, written impression pieces on it, and thoughtfully considered how the novel fits within Ozarks Literature. 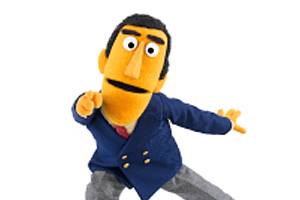 Dr. Blevins put no limits on me, and suggested I just say what I usually say when starting a reading. Being in my hometown, the Springfield that gave Bob Barker his intellectual underpinnings, I did my best Guy Smiley (my hero! And also, I believe, from the Ozarks), and we played quiz show. Our multiple choice game is, Who wrote this sentence?

“The tales which follow were omitted from my earlier publications, because the editors objected to certain inelegant expressions.”

Was it A) Donald Harington in a soon-to-be-released posthumous collection of short stories entitled Will Tell; B) Vance Randolph in his preface to Pissing in the Snow & Other Ozark Folktales; C) Henry Rowe Schoolcraft in the just discovered manuscript he titled More Stuff That Uncouth Backwater Hayseeds Told Me; or D) me in my apologia to my parish priest Fr. Gerard Hurley begging him not to excommunicate me after University of Massachusetts Press published Some Kinds of Love: Stories.

The answer was immediately guessed correctly, and on the first try! The winner received a free copy of Big Fiction Magazine, containing my novella, “Sandy and Wayne,” winner of the magazine’s inaugural Knickerbocker Prize.

In addition to reading from Rude Pursuits and Rugged Peaks, I read from this, one of many extraordinary entries in The White River Chronicles of S. C. Turnbo,http://thelibrary.org/lochist/turnbo/v4/st111.html

Between the scientific distance of Schoolcraft and the raw, brainwave cadence of Ozarks speech in The White River Chronicles of S. C. Turnbo, that’s where I wanted the narrator of Morkan’s Quarry to fall, insatiably curious about his people but not without the capacity for dismay or even indignation at what people are capable of doing.

Two of the dangers I see in being so far away from the Ozarks yet writing about home: nostalgia and boosterism can take hold. I love the Springfield I left in 1990, and the Fayetteville I left in 1998. When we hit the first winding curves, the first balds and limestone bluffs around Imboden and Ravenden, I have trouble speaking, and I am always glad that this is Tammy’s part of the drive. Reading and researching in local records with the help of Brian Grubbs at the Springfield Greene County Public Library Saturday, I was on the trail of a Springfieldian of some note from 1900 to 1914, Frank Headley, Jr. Newspaper articles praised much of his agricultural prowess, much of it corroborated by the structures he built at Springlawn Farm, but then, boosterism crept in to the record. One article, not contemporary to his zenith but from the 1990s, incorrectly stated that he introduced the first Percheron herd to America because he owned several show champions; the next article summarized that and polished it to a boosterish glare—our local citizen had introduced the Percheron breed to America. The error, repeated and expanded in journalism, accretes with nostalgia for a simpler, grander time into a faux fact. What we love and miss can make us rave. That is not why I write.

I was deeply touched by the enthusiasm and curiosity of the thirty students in Ozarks Literature, and with every minute astonished at how deeply they had all read and discussed the novel. The first question was, Now you don’t live in the Ozarks and you wrote some of Morkan’s Quarry while not living in the Ozarks. What affect does that long displacement have on your writing?

My gut answer was truthful, and I didn’t mean to be flip. I put a lot more snow and ice in Morkan’s Quarry because once I moved to Fayetteville, Arkansas, and especially when we moved to Flowood, Mississippi, I was doing without snow and ice. Many other great questions came, about Springfield history, quarrying, accidents at quarries, Ozarks geology, classes at Missouri State (Southwest Missouri State when I was there), which quarry in town inspired me, whether Leighton’s Galway was Galloway Village, the agency of African American characters in the book. What an unforgettable wonder that these readers had absorbed so much!

The Ozarks Studies Symposium continues its inclusiveness, a wonderful openness when you look at the program and presenters. Look at the variety here, from musical instruments to weather and religious studies, prohibition, and a celebration and memorial of University Press of Mississippi author, the late W.K. McNiel, who wrote Ozark Country for University Press of Mississippi. Would that all symposia on regions could be so open-minded! That the symposium would devote its keynote to a writer of literary short stories and the book, Some Kinds of Love, really brought inclusiveness home powerfully to me. I was doubly honored in that both Dr. Blevins and Lynn Morrow, co-creator of The White River Chronicles of S.C. Turnbo, were there to hear me read from the story “Starfall.”

Steve Yates reads from Some Kinds of Love: Stories at the Ozarks Studies Symposium West Plains, Missouri from Steven B Yates on Vimeo.

Too bad Tammy and I both had head colds that were obnoxious, and barely held in check by cold pills and plain good luck. I hope it doesn’t show in how I read. After the dinner—squirrel pot pie, paw paws, and gooseberry pie for desert, plus the gift of elderberry wine from Howell County News editor and publisher, Kim Wehmer, and the signature of editor and poet Anthony Priest, who included me next to Daniel Woodrell in Yonder Mountain: An Ozarks Anthology—we limped home to Springfield and family and the research I’m doing on a new project.

Still, driving to my other home, to Flowood on Sunday, there remains that lingering question, what does all this distance do to me? What does it do to what I can write?

Steve Yates was born and reared in Springfield, Missouri. He is the winner of the 2012 Juniper Prize, and his short story collection, Some Kinds of Love: Stories, was published by the University of Massachusetts Press in April 2013. Portions of his novel, Morkan’s Quarry (Moon City Press 2010) appeared in Missouri Review, Ontario Review, and South Carolina Review. A novella-length excerpt was a finalist in the Pirate’s Alley Faulkner Society Faulkner / Wisdom Award for the Best Novella. Moon City Press published the sequel, The Teeth of the Souls, in March of 2015. Two excerpts from it appeared in Missouri Review, one in Elder Mountain: A Journal of Ozarks Studies, and a novella-length excerpt in Kansas Quarterly/Arkansas Review. He is the winner of the 2013 Knickerbocker Prize from Big Fiction Magazine for his novella, “Sandy and Wayne.” Dock Street Press will publish Sandy and Wayne as a stand-alone book in 2016. For his fiction, Yates is the recipient of a grant from the Arkansas Arts Council and twice the recipient of grants from the Mississippi Arts Commission. His short stories have appeared in TriQuarterly, Southwest Review, Texas Review, Laurel Review, Western Humanities Review, Turnstile, Harrington Gay Men’s Literary Quarterly, Valley Voices, and elsewhere. Yates is assistant director / marketing director at University Press of Mississippi. More about his activities marketing books resides at Mississippi Bookstores and Louisiana Bookstores. Yates lives in Flowood with his wife Tammy.
Previous Post"Karmic Repatterning" Next Post"Floor Twelve - Pediatric Psych. Unit"

We weren’t saying much on the drive.  She had just gotten through telling me that I had “boundary” issues, that the path of healing I was on meant I’d end up sleeping with some woman, a student most likely.  I walked right out of the labyrinth.  I was fuming—so much doubt and fear, so much condemnation of my character, so much insecurity spewed in what was supposed to be a “sacred space.”  And then there was my fear that she might be right.  She had a knack for knowing things. I was just going to drive us home.  I was pretty raw from the Karmic Regression—the guided meditation, the visions, the sage.  It can take a lot out of you, cutting open the psyche and rummaging around down there.  I mean, I thought it was a bunch of bullshit, too, but I didn’t want anything spoiling this moment.  It was like she was trying to take away my new birth, my new and improved self.  So I kept my mouth shut.  Then she spoke first.  It was barely a whisper—she said, “You hungry?” “What?”  I honestly didn’t hear her, but I knew my voice was laced with venom.  I was turning onto