You lost your virginity to her, went steady spring semester at the University of Wisconsin, lived most of the summer with her and her parents in Tucson. Late August, she’s meeting your family on Long Island. Erin embroiders, walks like a model, does Old Overholt shots but won’t puff weed. She’ll study her junior year at the Fashion Institute of Technology in Manhattan; you’ll return to Madison as a sophomore. You’re moping, anticipating your long separation. Eleventh hour, your father, an educator, interferes, enrolls you at a community college near home so you and Erin can see each other weekends: a recent heart attack victim, he wants you happy. He’s already informed you she’s a real stunner. You get weekend jobs, stock boy at Harwyn Shoes, sales clerk at the Limited, at the Walt Whitman Shopping Center near your parents’ house. You cohabit weekends in their basement, shrouded in the bedroom you made in the tenth grade, the exposed frame of two-by-fours stained a dark color called Jacobean and polyurethaned glossy, with batik walls, beige paisley print on deep red, tacked to the outer side. Saturday and Sunday mornings you greet your parents and younger brother and sister at the breakfast table while Erin stays in bed for twenty or thirty minutes—shyness, you assume: a year or so later, when you’re drifting apart, she’ll tell you she masturbated then. She finishes her F.I.T. stint, you earn an incidental associate in arts degree. Next August you find yourselves back in Madtown sharing a pad off campus. You embrace school. Erin never has and still doesn’t like giving blowjobs. She graduates midyear, returns to Arizona. You break up. One evening several months later you fight with your new girlfriend, drive south for an hour, stop at a phone booth near Beloit. Erin answers at her parents’ house. You tell her you’re seeing someone from near Houston. She says she’s become known as the Wild Woman of Tucson and likes cocaine because it numbs the back of her throat.

Somewhere in your current basement, in a blue storage tub, folded in with a lot of other stuff you should get rid of so someday your wife or kids won’t have to, is a denim shirt of high school vintage Erin secreted in her dorm room and embroidered for your eighteenth birthday. It was too beautiful to ever wash. She sewed a Southwestern desert sunset across the entire yoke, a panorama so rich in thread, so plush, it was almost topographic: the fruiting saguaros and craggy brown mountains, the sky rippling blue, purple, red, orange, yellow. She worked on it for weeks, she told you. You guessed she’d done so on and off that entire March. Maybe she’d started even a little sooner.

And the wad of snapshots, what do you do with them? The ones of you and Erin hiking with her family’s dog, Nicky, a White Shepherd, in Saguaro National Park. Erin hugging herself in a shearling suede ranch jacket in your parents’ backyard, the monumental blue spruces snow-heavy. Of you, green eyes and sideburns and overpensive ​at eighteen, nineteen—certainly not the prick of her angry outburst towards the end. Neither of you looking like you deserved to be hurt. 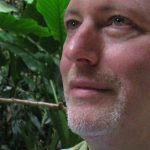 The Story Behind the Story: “Basement Love Story”

This story fictionalizes actual people and situations. I worked on it for about a year and a half (off and on, off
glenndeutsch 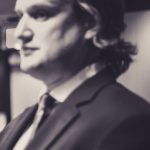 Glenn Deutsch’s stories and poems have appeared or are forthcoming in The Literary Review, Confrontation, Post Road, Notre Dame Review, Gargoyle, and Prick of the Spindle, among others. In the nineties he wrote for half a dozen newspapers and magazines in Milwaukee. Since 2002 he's lived on the other side of the lake, in Kalamazoo, where he is completing a story collection and his first novel.
Previous PostThe Story Behind the Story: "Basement Love Story" Next Post"Move Fast and Break Things"

The Story Behind the Story: "Basement Love Story"

This story fictionalizes actual people and situations. I worked on it for about a year and a half (off and on, off and on!) in tandem with another flash piece featuring the same characters. Initially I aimed “Basement Love Story” for a journal that limits flash to 300 words. That’s basically the long first paragraph in the final version. For a time I was calling the 300-word version “Overinvolved.” A friend I exchange work with, Andy Mozina, suggested “Basement Love Story” as the title, which certainly ended up being the better one for subsequent versions. A suggestion by an editor at another publication led me to add the second paragraph and a final one-sentence ending. But the story hadn’t found the right home, and not yet the right ending. Chris Tusa liked that version enough to suggest I tweak the ending to make it less obvious, more oblique. Rather than a move toward “some grand conclusion,” Chris suggested I do what I had done until that point in the piece, which was to reveal emotion through details. So I wrote a new final paragraph, the ending in the Fiction Southeast version of the story. As for why I tried to write about a relationship