Therese Walsh’s debut novel, The Last Will of Moira Leahy, was published by Shaye Areheart Books (Random House). It was named one of January Magazine’s Best Books of 2009, was nominated for a RITA Award for Best First Book, and was a TARGET Breakout Book. Her second novel, The Moon Sisters, was released in March, 2014 by Crown (Penguin Random House), and received starred reviews from both Booklist and Library Journal. The Moon Sisters recently reached #10 in ‘Bestselling NOOK Books’ at BarnesandNoble.com, and became a Kindle #1 Best Seller in Amazon’s Mothers and Children fiction category. For this segment of our Author Interview Series, we asked Therese what inspired her writing, how she found an agent, as well as a host of other questions. Here’s what she said:

WHAT INSPIRES AND INFLUENCES YOUR WRITING THE MOST?

Something has to intrigue me deeply in order for me to commit to it, in terms of deciding what to write about. In general, I gravitate toward interesting human quirks – twin phenomena, synesthesia, false perceptions – because they hold my interest while writing and provide a big body of literature to explore while doing that.

DO YOU HAVE AN AGENT? IF SO, HOW DID YOU FIND HIM/HER?

Yes, I have an agent – Elisabeth Weed with Weed Literary (weedliterary.com/). I found Elisabeth while researching the Publishers Marketplace database, which I highly recommend for folks searching for an agent.

WHAT SURPRISED YOU MOST ABOUT THE PUBLISHING PROCESS?

How little I knew about it, until I was thick in it. Also, how you can’t predict how things are going to evolve. You can try to read the literary tea leaves, as it were, but only in the most obvious cases (e.g. a superstar author) can you predict if a book will be a hit. This is my opinion; I know others will disagree. What I’ve observed is that a traditional book launch is set up like a row of dominoes. You believe they’re standing properly. You hope they are. And if each falls as it should, your book will have good discoverability and you may have a hit on your hands. What happens if the row fails? The book doesn’t break out, the author probably doesn’t earn out, and things become more difficult moving forward for that author. Traditionally, publishers only set that row of dominoes one time – when a book is released – or twice if a book has both a hard cover and paperback release. This is changing a bit in traditional publishing, as publishers realize they can set a sale at any time and re-boot a book.

DO YOU MARKET YOURSELF? WHAT (SPECIFICALLY) DO YOU DO TO BUILD/MAINTAIN YOUR READERSHIP?

I think every author nowadays has to market him/herself at least somewhat. I respond best to authors who are likeable, and so I hope that I present myself in the same way; that’s my goal. Before my last novel, The Moon Sisters, released, I made an effort to reach out to the people who had been vocal about enjoying my debut, to let them know my second book was about to be published. In terms of building new readership, I honed in on one aspect of my novel: synesthesia. Synesthesia is a neurological condition whereby people may have confused sensory areas, so they may taste music, smell color, that sort of thing. I reached out to synesthesia message boards, synesthetes on Twitter, etc… I also think it’s important to connect with book bloggers, to point them toward your book on NetGalley and Edelweiss so they can download your story and review it for their readership, which in turn helps to expand on your own.

BASED ON YOUR EXPERIENCES IN THE INDUSTRY, WHAT ADVICE CAN YOU OFFER WRITERS?

Three tips: 1. Listen to critique of your work and filter it through your gut before you make any changes; 2. Don’t be afraid to rip your story apart at the seams if that’s what’s best for the story. Recognize that you are the story’s servant; and 3. Persevere. Rest if you must, but never quit. 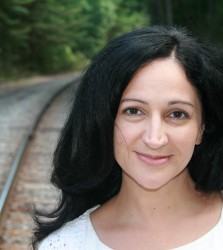 Therese's debut, The Last Will of Moira Leahy (Random House), was named one of January Magazine's Best Books of 2009, was nominated for a RITA award for Best First Book, and was a TARGET Breakout Book. Her second novel, The Moon Sisters, was published by Crown in March, 2014. Its working title, in case you're curious, was The Book That Tried to Kill Me. It had a few other titles as well, including The Foolish Fire of Olivia Moon. Therese is the co-founder and editor in chief of Writer Unboxed, an award-winning website and online writing community. Among other accolades, Writer Unboxed was named one of the top 101 sites for writers in 2007, 2008, 2009, 2010, 2011, 2012, 2013, and 2014 by Writer's Digest. Therese has a master's degree in psychology. She was a researcher and writer for Prevention magazine before becoming a freelance writer and eventually turning to fiction. Therese is an award-winning haiku'ist, thanks to Jimmy Kimmel, Carlton Cuse, and LOST. She hopes that you'll enjoy her novels, and invite her to Skype with your book clubs.
Previous PostReading Lists: Editors' Picks (Flash Fiction Collections) Next PostThe Ernest Hemingway Flash Fiction Prize

"What Happened to Mimi Acosta, the Most Beautiful Girl at Escuela San Benito"

(Cuba, 1961) The letter that secured her space on a flight to the United States came sooner than was expected. Mimi got to it first and hid it in her bra for a week before showing it to her mother. By then, it was wrinkled and torn, and barely legible. But her mother knew what it was, knew it in the sudden largeness of Mimi’s hazel eyes and in the chill she felt when she touched the thin paper, though it was still warm from Mimi’s body. In the Acosta house there would be no shouting, no cries, no hurried panic, but a desire to tidy and organize and mend things. Mimi began by giving away all of her furniture and leaving only the mattress. “Space,” she had said when her father asked, “I need some.” And he understood because he spent his days painting trim molding, replacing still new stove burners, taking apart electric fans and cleaning the blades. “Order,” he had said, when asked. Mimi’s mother was, in the end, the most productive those days. She had heard about a girl whose parents had had to blindfold her and tie her slim hands together to put her on the plane to Miami.