Tell us about I Don’t Like Where This is Going.

When Wylie “Coyote” Melville, therapist and forensic consultant, and his friend Bay, decide to flee South Florida, following a season of baleful unpleasantness, they come to Vegas, where Bay can play poker for a living and Wylie can volunteer his services at a local counseling center, keep his finger in the game, as it were, and himself out of mischief.

Their exile in this city of gleefully appalling desolation turns nasty when one afternoon, astonishingly, Wylie sees something extraordinary—a woman falling out of the sky, or more correctly, out of the compassed void that is the interior of the thirty-story hotel’s black pyramid. More astounding is the almost immediate cover-up and denial of this very public death, by hotel staff, public officials, the city’s image control bureaucracy, and by the hundreds who must have witnessed something amazing, but had games to play and returned to their tables. Wylie’s investigation into this conspiracy of silence leads him to the underbelly of the city’s lucrative sex-trafficking industry and to the corporate interests who see that the predation of children and young women is allowed to thrive.

When Wylie won’t cease, despite warnings, he’s ambushed, left for dead; his girlfriend’s kidnapped. He vows revenge. And though the odds are stacked mightily against him, he has Bay, the sleight-of-hand man, and the redoubtable Open Mike Lynch, the berserker, the bedlamite of chaos, on his side. What follows is a heart-stopping chase through the desert and a descent into the bowels of the city.

What inspired you to write the book?

After I finished my first crime novel, No Regrets, Coyote, I began to speculate on what had happened to Wylie and Bay, knowing that they had to get out of Florida fast. Bay was a poker player, so Vegas seemed obvious. I’d driven across Nevada many times and was always aware of how easy it would be to go missing in all that emptiness. That’s when I decided to write the new book.

What were your biggest challenges when writing the book?

As with the first book—solving the case along with my heroes. Who did it? I was 250 pages into Coyote and didn’t know. Slightly better this time. But a lot of rewriting is needed. With crime fiction you have to write a compelling novel and you also have to solve the crime.

Which authors and novels have been an inspiration to you, and why?

Chekhov above all. He taught me what a story was. His stories are so simple, clear, direct, and stunning. I became a writer, I suppose because I was moved b J.D. Salinger, especially Nine Stories, and by William Faulkner, especially The Sound and the Fury.  Also in my Pantheon are Alice Munro, William Trevor, Alistair MacLeod, and J.M. Coetzee. These are writers I read over and over.

What advice can you provide to aspiring authors?

Probably the advice you were expecting to hear: read and write every day. No holidays. We always find time to do the things we love. We have to want to write as much as we want to go to the movies. And if you don’t love writing and reading, do something else. It’s too hard, and discipline won’t bring you to the writing desk. Here’s Faulkner on reading: “Read, read, read. Read everything — trash, classics, good and bad, and see how they do it. Just like a carpenter who works as an apprentice and studies the master. Read! You’ll absorb it.” And Chekhov on writing: “Write as much as you can! Write, write, write till your fingers break.” 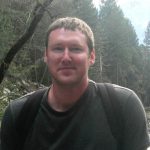 One of the things I love about reading and writing Flash fiction is that a story can turn or pirouette in one sentence from a standard narrative to something that floats off the page and impacts the reader. These texts only become stories when they've been lifted by this sentence, as if given the breath of meaning. The story that I want to use as an example is "The Canyon Where the Coyotes Live" by Bobbie Ann Mason found in The Best of Small Fictions 2015 published by Queens Ferry Press. The story starts not with a character name, but with a singular "she" who "lives near a canyon with four cats." Not the most fraught first line, but serviceable to get an idea of character and a hint at the problem. Lucky for us, dear reader, this isn't a normal cat lady, but rather a character that cares deeply for her cats as we soon find out they are a stand-in for the children she's never been able to have. Four paragraphs later, we get a quick, but detailed snapshot of each cat, and we, by the sheer use of detail know that this woman cherishes her cats. So a decent