My brother Dan and I were at the amusement park the last day it was open. It was pretty sad, actually. Only half the rides were operating. And the ones that were working were all busted up and rusty, with the seats ripped up. The funhouse had obscene graffiti sprawled all over the outside of it.

And there were weeds everywhere…

“You wanna ride the Wild Mouse?” my brother asked.

“I don’t think that’s even working…”

What I wanted to do was go home. The amusement park depressed me. It was like an old horse pulling a heavy load that it could no longer manage.

“Let’s just go down to the lake and look at the boats,” I said.

So we walked down to the dock. It was out beyond the funhouse. The asphalt ended and there was a gangplank that led down to a wooden dock. We stood there watching motorboats and pontoons speed across the expanse of Buckeye Lake. On the opposite shore we could see the backs of several nice houses. That was Harbor Hills, where rich people lived.

“Is that it?” my brother asked. He was pointing at some old wooden timbers rising up from the lake. They were in a shallow cove close to the dock.

“That’s it,” I said. “That’s all that’s left of the big ass rollercoaster that used to be here.

“The one people got killed on?”

“Yeah. Thing flew right off the tracks and right out into Buckeye Lake. Killed two people.”

My brother knew the story by heart but he was six and easily impressed by stories of carnage in his own backyard.

“And Mom used to ride that?” he asked.

“Mom could have been killed,” my brother said.

My brother threw a rock far out into the lake. It made a plopping noise as it hit the water.

“And this is where Dad met Mom?”

“Tell me that story.”

I really wanted to leave. It had been a bad idea coming to the amusement park on its last day but, oddly enough, I had never been here before. I thought of a picture my dad has hanging in his office—of the park in the 50s, about the time they first met. When Mom worked at the Breadbasket, a teenage girl with her first summer job. In the picture there are people swarming the boardwalk—girls dressed in poodle skirts, boys in stiff blue jeans and flannel shirts. The buildings are all new and clean and graffiti-free.

Back then, the rides tumbled and twirled. And at night they were all illuminated with electric chaser lights.

“Ok.,” I sighed. “Mom was working a busy lunch rush and Dad came in with one of Marine buddies to have a cup of coffee. And the coffee pot Mom had was really full up and…”

“She managed to spill hot coffee all over Dad’s lap,” Dan said, chuckling.

“That’s right. All over Dad’s lap. But Dad said he couldn’t get too mad because she had the prettiest eyes he ever saw. And while she was apologizing…”

“Where did they go, again?”

“He took her to a dancehall they used to have here. It was called the LC Ballroom. All sorts of famous groups used to play at the LC.”

“No. Not the Partridge Family. The LC was a little before their time.”

“Who did they dance to?”

“Some guy named Tommy Dorsey. Dad’s got a bunch of his records.”

We stood on the dock in silence for several minutes, watching the hot August air ripple above the lake, watching the boats dash past. I thought about my parents dancing and dancing to the sound of horns and trombones at the LC Ballroom. Looking into each other’s eyes in complete wonderment and happiness. The LC Ballroom is a parking lot now, just outside of the entrance to the park: a big gravel square of nothingness. And I thought of my parents at home, sitting in their separate chairs, staring silently at the television set, nothing much to say to each other now, not even looking at each other for the most part. It was all quite sad. 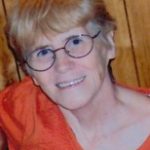 I am no stranger to oddity. In the early 1970s, I was standing in a voting line in Little Rock, Arkansas, chatting
jeneanmacb

Michael Walker is a writer/musician/artist living in Columbus, Ohio. He is the author of two novels: 7-22 (a YA fantasy book) and The Vampire Henry (a literary horror novel that will be re-published through Amazon on April 7th, 2018) He has seen his poems and stories published in various literary magazines. Currently he is writing a sequek to The Vampire Henry.
Previous Post"Winter Meditations" Next Post"The Girl in Platform Shoes"

The boy’s father is a crow. He imagines his father at the field’s edge, landing beyond the fence and drawing close its veil of wings. He imagines his father calling from the woods, the single syllables insistent yet far away. He searches for his father sometimes beyond the barn. The crows fly out from the trees and across the field. He watches them make their passage through the falling snow, watches the black of their bodies against the white of the earth. In his dreams the crows imagine they are geese and form a great V above where he is standing, and his father, beside him in the dream, lifts his body high into the air to become a black stain dotting the sky. “Stay back,” his mother says one Sunday when they are out in the yard. His mother pours lighter fluid onto his father’s slacks and plaid shirts and boots, then strikes a match. The flames are a fever when the boy edges near, even while the snow suffocates the earth. The boy remembers watching his father shoot a crow once with a .22. He remembers his father telling him that, when he turned eight, he would be able to shoot