It would have taken me a million years to kiss all her freckles. They were littered across her skin, poured on her shoulders, competing for the unmarked territory, forming half-made moons around the sweet cosmic dust that had been burned there. They were kisses from the sun, the stars and scars of her childhood, spent in the light. They had come to light as florescent beams licked her skin and hospital beds washed her out.

Glowing classic rock jangled my buoyant brain. I was trying to unplug my pain with the tip of my tongue, toying with that bead of Jack Daniels satisfaction. Nothing was washing her away. There was that night on her knees, screaming, begging God for her life with long drips of liquid terror that had run down her face like a semi-truck, but tears and IVs hadn’t mattered.

My bottle-fed life wrenched around in a liquid whirl. The TV slapped light across the disgraceful hoard of fast food trash that humped itself on the coffee table, propagating faster than rabbits. The pile spit napkins and balls of greasy paper across the floor as I stumbled by. I caught myself against the trailer’s back door and retched. Fumbling at the vomit-soaked door handle, I fell out it as it opened, collapsing on the wood porch, splinters kissing my back like the sun had kissed her with freckles. My vomit-breath was a dancer, lifting out of my mouth to pirouette in the wind and disappear into the cold air.

The trash cans by the side of the house rustled. Must be those damn coons. I squinted towards the door for the shotgun, but the mixed drink of my brain had been shaken, not stirred.

“Aye, you,” I said to the coons and crawled to my feet. I stumbled off the porch, snow crunching under my feet. “Aye you there, French kissing the trash cans. Those are mine,” I said, gesturing to myself. The mound of cans and bottles and elderly fast food bags shifted.

“Uh…shit,” the pieces of trash said.

“Oscar, is that you?” I asked and laughed at my own joke. Jim’s kid, Joey, crawled out from behind the pile to the chorus of glass and metal clanking against each other. I squinted at the grouch, him and his Dad were the only neighbors I had. Ten days after she and I had bought this little trailer in the country, they broke ground on a fine home right across from it, set back on one of those long driveways lined with trees. Not even little sad trees, they were the mature, shipped-in type, and though they couldn’t see us, we had always been able to see them. My drunken humor waned as my eyes groomed him. “That’s my rifle, kid.”

“I…I was just going to borrow it,” Joey said. His hands twisted at the stock and barrel, I could smell his sweat over my whiskey. The rich, they stunk like a copper penny.

“Where’s your dad?” I scratched at my whiskers.

“He’s in town. I’m supposed to be at my mum’s,” Joey said. I stared at the squirt and then peered around as if some form of reason might approach me from the dark woods.

“Who the fuck do you think you are, boy? Give me that.” I lurched towards him and tried to snatch my gun from his hands.

“Hey, kid let it go,” I said and jerked at it. He held tight, turning his back towards me and twisting the rifle. My world swirled and my whiskey legs pushed me forward. I stumbled on his foot and wobbled, right before I fell forward, hands grasping at the cold metal, competing with his little fingers. We smashed together on the cold ground, cans flying, glass breaking. I let out a grunt and rolled off the kid into the beer cans and glass. A gasp sucked at the cold. Little, wet sucking noises punctuating the stillness. Wet dread slid down my gullet, burning like a shot. I turned Joey over.

Jack Daniels had his silver moonlight poking out of the boy’s throat. My mouth parted and the night touched the edges of the blood glass. He coughed and blood popped out of his mouth. It was like that scene in Jaws when Captain Quint gets bit down on and the blood, it just leaps from his mouth.

I heard myself laugh. Joey reached up to his throat and plucked out a large piece of the offending material. The ensuing wet gurgle made my brain wake up. There was no coming back from that one. I stood up.

“No, please,” he tried to say, reaching out to me for some kind of comfort as I walked away. He usurped the image of her reaching for me and myself taking her hand. The lunar halves of her nails had penetrated so deeply into my skin I thought they would stay forever, dark like her freckles. His grasping reach washed that away, I could no longer see her.

I pretended as though I didn’t understand his guttural calls. I grabbed a shovel from the other side of the porch and walked back around to watch him. Joey was trying to shake his head, pulling glass from his throat, not understanding he was the reason he was bleeding out. He had control of this. My shovel bit into the frozen dirt. It would be a tough hole to dig, ice and roots, but he was no larger than a dog, slim for an adolescent. He whimpered as I over turned the dirt next to him. He became slower, movements dying off with rest of him. The cold of laminate tiles and the dripping, beeping of machines had been sucked from me. The cold of the snow, the depth and darkness of a night, that was not lit by florescent lights, brought me to this time in which splinters pricked my skin, not like freckles, just splinters.

My feet struck the side of the road, pounding in a steady, unbreakable rhythm. The last of the snow was melting into spring and muscle had bloomed across the expanse of my body. It was the intense after-work regimen I had committed to. I waved to Jim as I turned into my drive way. His grey face barely processed my acknowledgement. It was a shame about that kid. The cops had no idea what had happened to him, just disappeared from his mother’s one night.

I pulled open the door and headed to the kitchen. The floors sparkled, the fridge overflowed with spinach and island held a cornucopia of fruit. I grabbed a water and flopped onto the couch, feet propped up on the coffee table. A small pile of fishing lure coasters and a bonsai tree sprouted from the center, every sprig clipped into form. It had taken a while to scrub the grease out of everything, including myself.

Through the window, which I had turned the couch to face, I watched Jim’s van make its daily, futile trek down to the police station. Today must have held more frustration than normal, darkness arrived before he did. I blinked as his dog poked its head out the doggie door and began to wander across his front yard. With no master to call him back, he crossed the road and began to sniff around my yard. I followed him through the windows as he came to the back of the house. His nose was snuffling in the dirt. He began to dig. I pulled my shotgun off the new inside rack and opened the new back door.

I listened to the jangle of Jim’s doorbell sound through his house. His heavy steps came to the door and he opened it without checking to see if danger laid in wait. His face was like the bags of fast food that had papered my trailer, the wrinkles of his face set in patterns of sorrowful aging. He was clinging to the one pain that needed to be ripped out by the roots.

“So sorry, Jim, I’m afraid I messed up and I didn’t want you to worry,” I said, presenting him with a heavy trash bag. Lying, against my arm, through the plastic, I could feel the dog’s still-warm tail. “I heard rustling in my trash and thought he was a coon.” 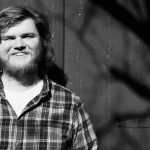 “Play Me Out, Jack Hopke” 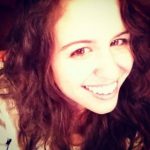 Usually we play Go Fish or War, but not tonight.  It’s the third night in a row we’ve been sitting in my room with th
bruno

K.J. Pearce is a writer, horse rescuer, and 2019 graduate of Rollins College in Winter Park, FL. Although she is only beginning her journey ("A Jack Daniels kind of Bullet" will be her first published work), she was thrilled to be workshopped by Hillary Jordan, Lisa Ko, and Elliot Ackerman during her internship with the Winter with the Writers Literary Festival.
Previous Post"Doorkijkje" Next Post"The Nature of Trees"

Tess walks from the Met through Central Park. It is Saturday morning and the park is crowded with a fun run. The ground rumbles with thousands of running feet. Supporters hoot and cheer. Woohoo! You go girl! She sits on a bench and watches people run past, some heavy and tired, while others are effortless. A man further down the bench reads Milan Kundera’s The unbearable lightness of being. Tess doesn’t know whether he is in fact reading or looking beyond the book at the lycra bodies. In any case, she doesn’t trust anyone reading Kundera in public. She stands and walks away. # At the Met, Tess saw “A maid asleep” by Johannes Vermeer, dated 1656-57. She studied it for her thesis and knew everything about it and nothing at all. In the 1696 sales catalogue, the woman was a “drunken maid asleep at a table” and, in exhibitions since, “The cook asleep” and “Girl sleeping”. The woman’s head rests against her fist, her elbow on the table. She may not be a maid. She wears a black peaked cap—a til, and a bronze, silk jacket and pearl earrings, suggesting an elevated social class. She could be Catharina Bolnes, Vermeer’s wife, or